Camillo stands by vaccine mandate; says it allowed children to return to school 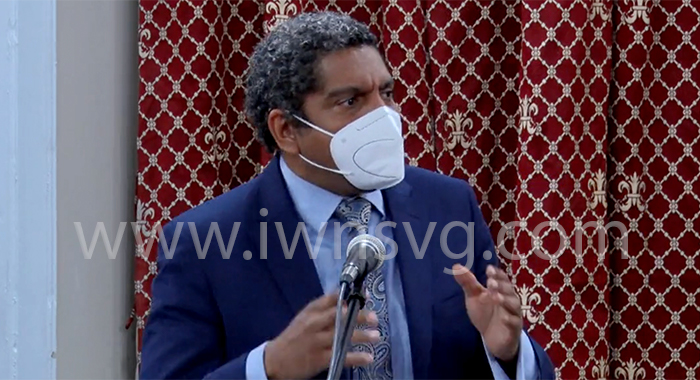 Minister of Finance, Camillo Gonsalves says he still supports the COVID-19 vaccine mandate for teachers, as it allowed Vincentian students to return to school sooner than in many other Caribbean countries.

The minister spoke in Parliament, on Thursday, during a debate in which opposition lawmaker Fitz Bramble pleaded with the government to rehire the teachers who were fired for failing to take a COVID-19 jab.

But the finance minister said the opposition’s position has shifted as it now urges the government to focus on the economic impact, even as it had accused the government of doing so during the early months of the pandemic.

Gonsalves spoke as he debated an amendment that would allow certain teachers who resigned as a result of the mandate to receive their pension.

He said that the Vincentian Parliament may be unique in that the overwhelming number of MPs have taught at some stage in their careers.

“Teachers play a critical role in society, as we all know. That’s an uncontroversial statement. But teachers exist, first and foremost, to serve the needs of the students and children. And missing from most of the debate today about teachers has been a little element called children.”

He said that while opposition lawmakers spoke in outrage about the government’s policy, most of them failed to mention the children who were affected by the pandemic.

“The children of St. Vincent and the Grenadines missed 205 days … of face to face instruction. An academic year is 180 days, give or take,” he said.

“Those you see in form 3 really at form 2. This is a lasting legacy of COVID,” Gonsalves said, adding that the situation is worse in other Caribbean countries.

The finance minister said that in Jamaica, students returned to the classroom on March 7 and, in Barbados, on Feb. 21.

He said that while many lawmakers have been teachers, unlike him and a few other MPs, not many of them have children in school.

“I know because in them groups for my children. They spoke on radio, their voices are heard on the street, ‘I’m not sending my child into the classroom with no unvaccinated teacher.’ That was said.

“And I know I was not sending my children into a classroom with unvaccinated teachers,” the finance minister said.

“And if you don’t know that you’re not a man on the ground that you claim to be,” he said in response to comments from across the floor.

Gonsalves said that a significant contributor to SVG being able to resume face-to-face classes during the pandemic, before many other countries “was the policy of this government to ensure that the teachers in the classroom were vaccinated.”

He said that the science indicated that children were less likely to contract the earlier variants of COVID-19.

“And the second thing that was established was that teachers were a greater vector for COVID transmission than many others, certainly more than the children in the classroom.”

He said that because of these two points of data “a decision was made, a decision that took into account the views of parents of these children, that the children would be safer in classrooms with vaccinated teachers.

“How can we dispute that? That was at the root of the decision that was taken.A lot of people want to have amnesia.”

He said that the same people who wanted the government to lock down the country when there was just one case of COVID-19 “now want to pretend that there was no fear, no concern about parents sending their little children into classrooms with unvaccinated teachers. That’s dishonest.”

The finance minister said the opposition was ignoring all of the vaccine mandates for teachers all across the world.

“That is a forgotten thing? We are alone in our wickedness? No. A decision was taken in the light of the science that was available that suggested that children, my God, children, would be safer in a classroom with a vaccinated teacher.”

He said there was much talk about teachers “but no talk about the fact that the decision was made to keep 30,000 children safe by making sure that the teachers who taught them are vaccinated”.

Gonsalves said that parents were scared and he had his own fears when classes re-opened.

“And you, as a parent, you’re thinking of the myriad of risks that could befall your child on the way to school at break time at lunchtime after school. And you’re trying to get all sorts of assurances…

“And top of the list was, ‘Is my child’s teacher vaccinated?’ We can’t pretend that that was not a concern. And this policy got our children back into classrooms before other countries got their children into classrooms…

“So, I support then and support now the policy. When the circumstances change to admit other circumstances, I’m fine, we discuss them. But the public health emergency is continuing,” Gonsalves said.

5 replies on “Camillo stands by vaccine mandate; says it allowed children to return to school ”