Man jailed for gun he brandished at his girlfriend 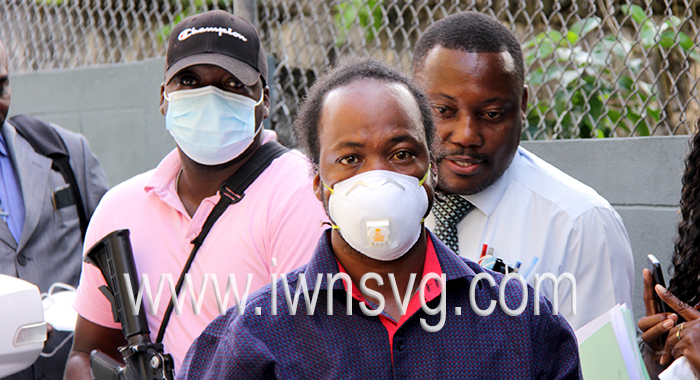 The defendant, Joloney David, centre, is escorted to court on March 9, 2022.

A man who brandished a firearm during an argument with his girlfriend over food has been jailed for three years and seven months for possession of the unlicensed weapon.

Chief Magistrate Rechanne Browne handed down the sentence on Joloney David, 32, a mechanic of Belmont/Glen, at the Serious Offences Court, on Monday.

David had initially pleaded not guilty to the charge at his arraignment on March 9.

On Monday, he pleaded guilty to a charge that on March 7, at Glen, he had in his possession an unlicensed black and silver .38 Python pistol, serial number D05537.

He maintained the not guilty plea on a charge that on the same day, also at Glen, he assaulted Samantha Fernandez, of Glen, with intent to commit an offence.

The facts of the case, as read by Corporal Harry are that on March 2, about 3:05 p.m., David went home from work and he and Fernandez had an argument over food.

After the argument, David left and went away.

He returned about 6:45 p.m. and continued arguing with Fernandez and demanded that she return to him some money he had given to her.

Fernandez told David that she had no money for him.

David took off the black JanSport bag he had over his back, took out a gun and pointed it at Fernandez, who managed to see the gun using her phone light.

David was still demanding his money and Fernandez ran upstairs by her house and began to scream.

The defendant left the house and went away and the matter was reported to the police, who visited the scene and recorded a statement.

Fernandez went home and met the defendant in the yard arguing.

The police were called and Sergeant 191 David and a party of officers went to the scene where they met and arrested the defendant, who appeared to be under the influence of alcohol.

On March 8, about 7:15 a.m., Sergeant David, armed with a search warrant, went along with the defendant to the defendant’s home.

The officer saw a black JanSport bag in a small banana field nearby. The bag contained the firearm, which Fernandez identified as the one that her boyfriend had pointed at her.

David was cautioned and said nothing, but later gave a statement in the presence of a justice of the peace, admitting to the offence.

The caution statement was read in court.

A police ballistic expert examined the firearm and found it to be in good working condition.

In mitigation, defence counsel, Grant Connell told the court that David has a previous conviction that is 10 years old.

Connell said that the defendant has one child and is extremely remorseful for his actions.

He said that someone had asked David to repair the barrel of the firearm.

“He did not point it at the VC or in any way threaten her or intended harm. The firearm did not have any ammunition in it but the mere fact that he had it on him at her premises is aggravating,” Connell said.

He said his client is not a threat to society, adding that the defendant’s father is very ill.

The lawyer said the sentencing guidelines seem to suggest that David’s punishment was border-lining non-custodial.

“Thank God for mercy that no harm came,” Connell said.

He said that having looked at the firearm, the barrel was partly broken out.

“You have to hold the barrel and spin with your fingers if you are going to shoot,” Connell said.

However, prosecutor Station Sergeant of Police Renrick Cato told the court that the presence of a firearm during the commission of a matter put the crime into category 2 rather than the lower category — 3, as the lawyer suggested.

“This is a matter that a boyfriend and a girlfriend had an argument and I see in my opinion there is absolutely no need to present a firearm during an argument.”

Cato said that Fernandez reported the matter to the police immediately and went upstairs screaming.

“There must be a reason why a report was made. Although the firearm is not well-kept, it is still a firearm and we are still plagued by firearms and firearm offences in St. Vincent and the Grenadines.”

The prosecutor disagreed with the lawyer regarding a non-custodial sentence.

“These types of offences should never at all be tolerable, should not be acceptable and whenever they present themselves in the court, we must treat them in such a way that other persons can be deterred and the sentence must be such that persons can say and see the court’s view and the seriousness with which it views these offences.”

Cato noted that the facts of the case said that David seemed to have been intoxicated at the time of the offence.

“The facts said that he appeared to be intoxicated. Alcohol should never be an excuse. It is, in fact, an aggravating feature.”

Connell, however, said that his client had pleaded not guilty to the offence to which Cato had referred.

The chief magistrate said that she understood and took onboard Connell’s comment, but noted that a phone call was made to police and as a consequence, the defendant is before the court.

“And scream,” the chief magistrate added.

In handing down the sentence, the chief magistrate began with a starting point of 65% of the maximum sentence — 7 years in prison or a fine of ECS20,000 or both.

This amounted to four years five months in prison.

She said an aggravating feature was the prevalence of firearm offences in St. Vincent and the Grenadines.

Browne noted that the firearm was brandished, seemingly to frighten, scare or cause some harm.

“Those are extremely aggravating features. The presence of alcohol would further impair judgement,” Browne said.

Mitigating was the fact that the firearm was recovered.

A further six months was added to the sentence.

Regarding the offender, she noted that David had a previous conviction of a serious nature, adding that it appears to be a firearm offence to her.

“That shows propensity,” Brown said. “It is not only the time but the nature of the offence.”

Mitigating on David’s behalf was the remorse he had shown for the offence.

These balanced each other out, Browne said.

She granted the full one-third discount, one year and four months, for the guilty plea, although it did not come at the earliest opportunity.

This brought the sentence to three years seven months.

The chief magistrate further ordered that the firearm be confiscated and informed David of his right to appeal.

“These offences, coupled with the other one that related to assault of a partner, the court frowns on these offences.

“If there is a union, let love exist and prevail… There should be no room for aggression, violence or presence of fear or intimidation,” Browne said.