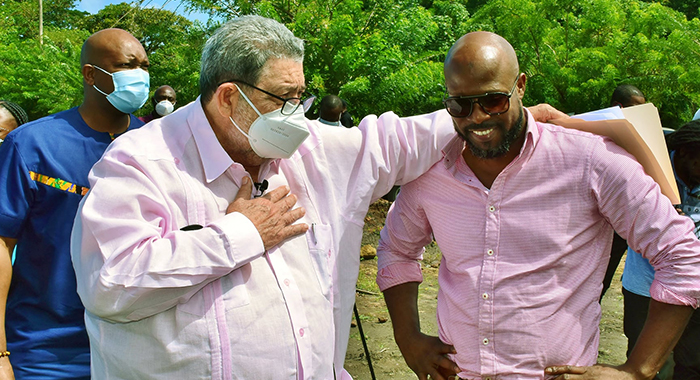 MP for North Leeward, Carlos James, right in conversation with Prime Minister Ralph Gonsalves, during an official visit of the quarry site in Richmond on March 11, 2022. (Photo: Lance Neverson/Facebook)

A constituent aggrieved by the setting up of a quarry in Richmond says he has spoken to North Leeward MP Carlos James “plain and straight” about the project.

“Because my point is this: I elected him. I don’t go to Parliament. He is our voice in the house,” said Charles who told the meeting that his was the deciding vote that gave James the one-vote win in North Leeward in 2020.

“And if you can’t defend your people in the house when the time comes — because the prime minister said Mr. James endorsed that.”

Charles spoke at the meeting on behalf of the North Leeward Heritage Preservation Front, telling the meeting that his presence on the platform says that the issue was beyond politics.

He was peeved by the attitude of government officials, led by Prime Minister Ralph Gonsalves, on an official visit to the quarry site on March 11.

“… my elected representative did not even get a chance to utter one single word on a project in his backyard,” Charles said.

“Come on now, man. Come on. Come on. Our boy didn’t even get a chance to speak.

“And then when he left Richmond, you lock up in your air-conditioned vehicle and you drive through Fitz Hughes with a scorn.

“You didn’t stay at the stop and run a few drinks for the guys and talk with few ah the people; you lock up and you go where you come from. And we must take this? We must take this?”

Charles said that “none of the guys who stand to benefit” from the quarry live in Fitz Hughes.

“Our minister doesn’t even live in North Leeward. We have nothing personal against these guys, but wrong is wrong…”

Charles asked whether the ministries to which the SVG Conservation Fund had sent a letter of objection to the project last November had responded.

Environmental scientist Reynold Murray has said that the 14-year-old report that he produced, which the government has cited in supporting the project, cannot be used in this way as it is absolute.

“We need the truth. We need an environmental study specifically on the health effects on people in Fitz Hughes also with the noise.”

He also asked about the hours of operation of the quarry.

“We did not know any of those things. We also would like to know, what is the industrial relationship with Rayneau in St. Lucia,” he said.

The government has leased 59 acres of land for 30 years to St. Lucian firm Rayneau Construction and Industrial Company to operate a quarry.

“What is their industrial relations over there? We need to know that loud and clear.”

Charles said “most importantly” is a response about what will happen to all the soil that has to be removed from the mountain because the rocks can be mined.

“Remember, Bigger Bigs was closed for not controlling his waste; so, they say,” he said, referring to Leon Samuel, whose mine at Rabacca the government shut down in 2010.

Charles called on residents of North Leeward  “to close down the quarry”, saying, “It nah good for us.

“We can do it, but we have to unite. We need to have further engagement among ourselves and do our own research and reading.

“And for a project of this magnitude, so much should have happened before they started.”

“Nobody could justify what is happening there, no matter how they attempt. You cannot justify it.

“And so I want all of us to remember that yes, one piece of silver for every year but for those of us who know our Bibles well and believe in it, I want us to remember what happened to Judas after he got his 30 pieces of silver…

“The government knows what they’re doing is wrong. And I am calling and we are calling upon them to stop it. Amend your ways and your doing…

“What you are doing to North Leeward, it is wrong and it will cost us our lives and livelihood. It is not too late to stop it.”

Charles also said that residents want a public apology to North Leeward and the entire country over the government’s handling of the project.