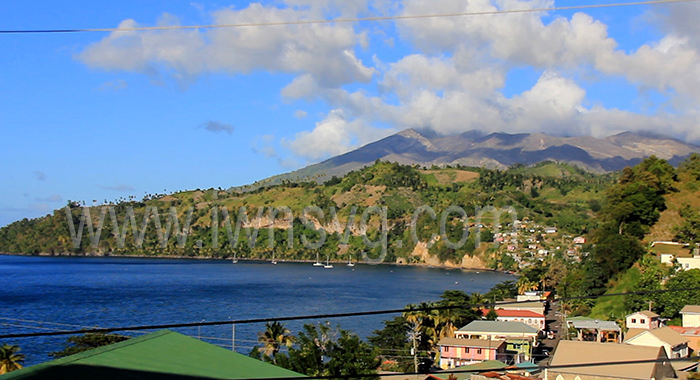 A Feb. 3, 2022 photo of the headland where the mining will take place, with Fitz Hughes and Chateaubelair in the foreground and La Soufriere in the background.

An educator and Fitz Hughes resident says that a volcano monitoring station is located on the hill where the quarrying will take place in Richmond.

“The pole for that station [has] gone to a depth of 35 feet. The blasting is going to interfere with the reading,” Adonis Charles said on Friday, one day before the one-year anniversary of the last eruption of La Soufriere.

“Nobody concerned about us? Nobody? Is this what we voted for?” said Charles who said his was the winning vote for the ruling Unity Labour Party’s Carlos James in the 2020 general election.

He was speaking at a community meeting in Fitz Hughes, organised by the opposition New Democratic Party, on Friday, in response to the 30-year lease the government has given to a St. Lucian firm to mine stones on 59 acres of land in Richmond.

“So we have a prison at Belle Isle, a landfill at one end and a quarry on the other side,” he said, referring to the projects that the ULP had implemented at the extreme boundaries of the constituency.

“So we are [encapsulated]. It’s like saying to us… we are going to make you more impoverished than you already are by doing this. I want you to read with me and read between the lines.”

Charles said that some residents on the headland between Fitz Hughes and Richmond say they are scared when the sea is rough because they feel the vibration coming from the waves.

“Any blasting [that] takes place at Richmond to get that rock down; you are the ones who will be the first to reach into the seawater.”

Charles further said dust from the quarry would be a problem.

“The hospital had to be nebulising people every night because of asthma. There was no consideration.”

He noted that the Fitz Hughes primary school is built with open blocks so as to allow the natural flow of air.

“So when the dust starts to come over, what are they gonna do?”

He asked whether a quarry was the only thing that the government could give to the constituency in light of its resources and needs.

“My stepfather gets his NIS cheque; he has to travel to Kingstown to collect it and change it. Come on! No banking service in North Leeward.”

Charles also noted that there is no revenue collection service in the constituency, which is geographically the largest in St. Vincent.

“The closest places … to pay liquor licences and all that sort of support, you take it to Barrouallie, but you want to bring this to us…

“And it is worrying that this action is portrayed by a government in power. How could we agree with this, whether we supported them or not? You have no regard for us in Fitz Hughes.

“We are saying stop the project; stop the project, stop the quarry. It can’t go up there.  If anything comes out of it, the land is already torn up, it will grow back. The project will not do us good. Stop it. Stop that reckless behaviour and have consideration for North Leeward.”

Many residents of the area, including farmers, became aware of the lease when tractors began ploughing through their farms on Jan. 29.

Others learnt about it through an iWitness News report on Feb. 2.

“North Leeward does not deserve this disrespect and disdain; we do not,” Charles said.

He continued: “If you prick us, we will bleed and if you wrong us, we will avenge.  A time comes when a man can take so much and no more.

“St. Vincent’s a nice country, man; let us keep it nice. We are a loving people. Go down with the disrespect, nuh man. Come on; recognise us for who we are. We must not only be seen as — well they say voting cow or whatever it is…”