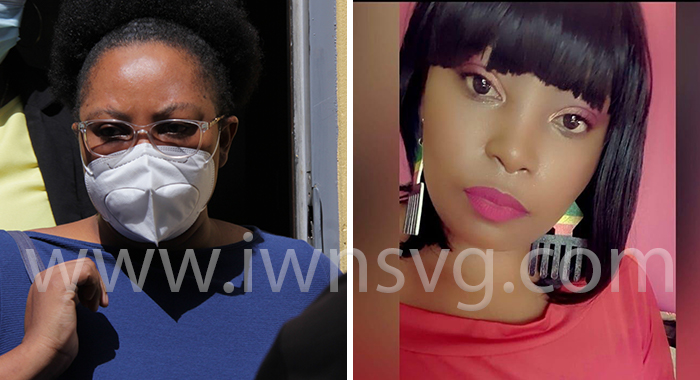 The accused, Lucresha Nanton, outside the Serious Offences Court on Wednesday, April 20, 2022 and in a photo posted to Facebook on Jan 20, 2022.

Police have arrested and charged a nurse in connection with the 60kgs of cocaine allegedly found at the Owia Clinic on Jan. 22.

On Wednesday (today), Lucresha Nanton, 34, of Owia, appeared before the Serious Offences Court, charged that on Jan. 22, at Owia, she had in her possession a controlled drug, to wit 59,939 grammes of cocaine, with intent to supply it to another.

Nanton was also charged with possession of the drug for the purpose of drug trafficking.

She pleaded not guilty to both charges.

Prosecutor Station Sergeant of Police Renrick Cato did not object to Nanton’s bail.

He asked the court to order Nanton to surrender her travel documents, impose reporting conditions and issue stop notices.

Regarding the bail amount, Cato said:

Chief Magistrate Rechanne Browne said that the bail amount would be “a heavy sum” and that she would have to “shackle” the defendant with other sanctions as finding a surety with that capability in the jurisdiction would be difficult.

Meanwhile, Nanton’s lawyer, Ronald “Ronnie” Marks urged the court not to impose a bail figure that would amount to a denial of bail.

He said that Nanton’s parents were trying to get a copy of their deed and that her passport was in Owia.

The lawyer asked the court if his client could surrender her passport to the Owia Police Station.

The chief magistrate denied the application.

Browne set bail at EC$200,000 with two sureties and ordered Nanton to surrender her travel documents.

The court ordered that stop notices be placed at ports of entry and exit and that Nanton must obtain the permission of the court to leave the jurisdiction.

She is to report to the Owia Police Station on Mondays, Wednesdays and Fridays between 6 a.m. and 6 p.m.

The next hearing is set for June 20.

Nanton was taken to prison, pending the satisfaction of her bail criteria.

Police reportedly found the drug in a barrel inside the Owia Clinic during an operation on Jan. 22.