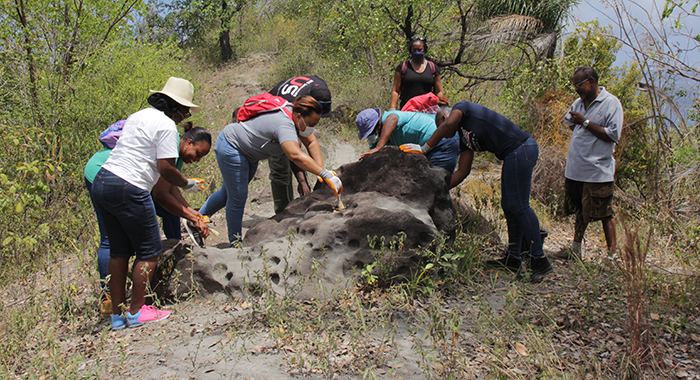 The cleaning of 13 Stones Petroglyph in North Leeward.

St. Vincent and the Grenadines (SVG) National Trust is working to mitigate the impact of the April 2021 eruption of La Soufrière volcano on the nation’s petroglyphs and other historical sites.

Recently, the SVG National Trust led a number of community groups to clean 13 Stones Petroglyph, located on a ridge between Petit Bordel and Chateaubelair.

Although the site is called 13 Stones, it comprises over 16 rocks, into which hundred of “cup holes” are carved.

“Various community groups have come together as part of the workshop carried out by the Caribbean Branch of the International Council on Archives: Caribbean Heritage Emergency Network (CARBICA-CHEN) and UNESCO, where we are actually doing the practical cleaning of these petroglyphs.”

The cleaning of the petroglyphs was part of a series of workshops organised by the Department of Culture, the National Commission for UNESCO as well as the Cluster Office for the Caribbean in collaboration with CARBICA-CHEN.

The webinar series focuses on building capacity and resilience for cultural heritage in St. Vincent.

“This project is basically about targeting heritage areas affected by the eruption of the volcano,” Bentick Phillips said.

“The objective of this exercise is to build a knowledgeable and resilient cultural heritage emergency response team.”

These groups participated in the activity.

Bentick Phillips said that when the group arrived at the site, they found the cup holes full of volcanic ash, just one week shy of the first anniversary of the eruption of the La Soufriere Volcano.

“It pains me as a Vincentian to know that a lot of these things go largely unnoticed; people hardly pay any attention to them,” said Vincent Reid, who has been commissioned by the St. Vincent and the Grenadines National Trust to map all historical sites in St. Vincent.

The project is funded by UNESCO through the Post Disaster Needs Assessment under the Heritage Emergency Fund Project and SVGNT is coordinating the effort.

So far, Reid has mapped 54 sites, including petroglyphs; buildings; natural features, such as Rabacca; salt ponds, historical structures, such as the Orange Hill and Fitz Hughes Aqueducts, and stone pillars in the schoolyards in Fitz Hughes and Evesham.

“People hardly pay any attention to them but they are there and they tell a story. They say to us this is where you came from,” Reid said.

“They tell us that there was someone before us. They were our forefathers. They were there before us and it is important that we respect and try to preserve what they left as a record of their existence,” Reid said.

He said that respecting historical sites is akin to All Souls and All Saints observances on Nov. 1 and 2, in memory of departed loved ones.

“That’s you showing respect for them, for their memory. These people came before us and left a record of their passing and we need to respect that.”

“Vincentians need to get on board and look at these cultural heritage sites, these petroglyphs and all these other buildings that speak of our first existence, of our history, and respect them and have pride in knowing where they are, what they mean and do everything that they can to preserve it.

He said that petroglyphs are public property but some occur on private land.

“But the private owners [of the land] are aware of them and know that they belong to the nation and not to them specifically.”

Reid said that there are petroglyphs in Colonarie and Buccament Bay that are on private property whose owners have protected the artefacts but have not tried to restrict public access to the sites.

Reid explained the importance of petroglyphs:

“They are records of the people who came before us. In some cases, they are ceremonial sites. In other cases, they are calendars, they are work stones, they are boundaries, and they send messages.  We may not necessarily understand the language but they are there, deeply incised in the rocks and we know they were made by someone way before our time.”

One reply on “Petroglyphs get post-eruption cleaning”