Collapsed road in Belmont to get further attention 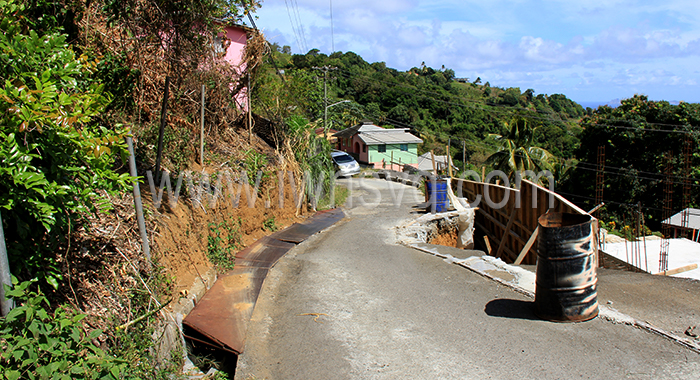 The repairs done to the road, seen here on Thursday, April 21, 2022, does is not enough to allow larger vehicles to use the road.

A road in Belmont that collapsed about a year ago as a result of the construction of a private home will get further attention from the Bridges, Roads and General Services Authority (BRAGSA), a state-agency.

The road was impassable to vehicular traffic for some time last December, and some repair work has been done since then.

However, larger vehicles cannot use the road, impacting business and construction in the residential area.

He said he visited West St.  George, where Belmont is located, and South Windward, along with their parliamentary representatives, Curtis King, and Frederick Stephenson.

Daniel said the road networks in those areas are of concern to the representatives.

He said that BRAGSA was asked to assist in building a concrete wall structure.

“It is insufficient for what is required and so BRAGSA will have to continue to do further repair work so as to stabilise the road in a way that it can be used for the travelling public,” Daniel said.

Daniel said that King was concerned about the inability of larger vehicles to access the village.

“And so, I want to let the residents of that area know that BRAGSA will be back into that area to restore some work on the wall on that road to ensure that the stability of the road is maintained and, of course, to have that access going through there.”

The minister said there are other roads in the constituency done by the contractor KDL, which, in the first phase, was contracted to do 11 roads and 12 in the second phase.

“Of course, the matter came to my attention quite recently on the issue of the non-payment of the subcontractors and the prime minister was alluding to the fact of the situation just before he left.”

He said his ministry would meet with KDL to have further discussions “and to see how we can continue to work together on this matter”.

He said that roads have been identified in other constituencies “and equally all of the other representatives in the various constituencies are concerned in terms of the pace to which the works are being done”.

Daniel said that in South Windward he visited “one or two other roads.

“And I know that you go into the back of Biabou, as you go up to Simon, that road, of course, it is, indeed, terrible and we were there … looking at it and, of course, to do some work on that road as soon as possible”.

He said it is not an easy task for BRAGSA “but the roads have to be accessible to the extent that it is usable to the road users.

“And so, of course, Simon is one of those areas to which we will have to do some work in that regard.”

2 replies on “Collapsed road in Belmont to get further attention”