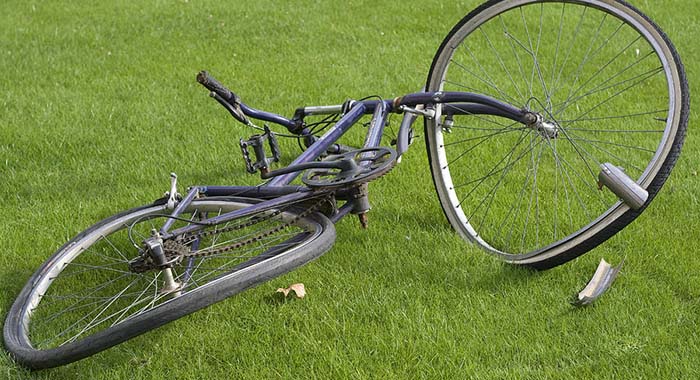 An Internet photo of a damaged bicycle.

An Edinboro man has been ordered to pay EC$600 in compensation and a fine of EC$750 or serve prison time for damaging a bicycle.

Delroy Durham, 30, pleaded guilty at the Kingstown Magistrate’s Court, to a charge that on April 17, at Edinboro, without lawful excuse, he damaged one bicycle wheel, valued at $300 and one bicycle derailleur, valued at $300, the property of Amanda Mason, of Edinboro.

The facts of the matter are that Mason, the mother of Joel Mason, a 13-year-old student, of Ottley Hall, bought him a red, blue and black bicycle.

On April 16, about 1:55 p.m., her cousin, Shorn Mason, borrowed the bicycle to run some errands in the Edinboro.

After running the errands, Shorn stopped near the hard court in Edinboro.

While there, the defendant and his brother, Romano Durham, approached Shorn and there was a quarrel between them.

Delroy claimed that Joel’s father owed him money and Delroy said he was going to seize the bicycle.

Ms Mason told Delroy she he had no knowledge of the money allegedly owed and while Ms Mason was speaking with Delroy, he took the bicycle and smashed it to the ground three times, damaging the rear wheel and derailleur.

The matter was reported to the Ottley Hall police substation.

The Criminal Investigation Department were informed and officers visited the scene.

The officers took the defendant and the bike to the police station and Ms Mason made a formal report.

Durham was charged and he volunteered a statement in writing admitting to the charge.

In mitigation, Durham told the court that he works in construction for EC$45 a day and has no children.

Asked about the damage to the bike, the Durham said, “The back wheel bend up.”

“Well, the value of what was done by you is $600,” said Senior Magistrate Rickie Burnett, who was presiding.

“I can pass back to bring some money,” the defendant said.

Durham asked for sometime to pay the money.

Burnett ordered him to pay compensation of EC$600 by April 29 or serve three months in prison.

He was further ordered to pay a fine of EC$750 by May 31 or six months in prison.

“All of this could have been avoided,” Burnett said.

One reply on “Edinboro man to pay compensation, fine over damaged bicycle”