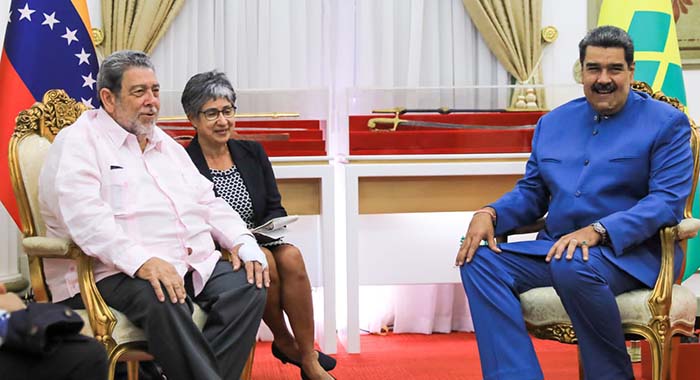 Venezuela has agreed to cancel St. Vincent and the Grenadines’ debt under PetroCaribe, its oil initiative with Latin American and Caribbean nations.

This could see the national debt fall by 9%, Prime Minister Ralph Gonsalves said Tuesday on his return from Caracas, where he spent 10 days after falling ill on Holy Thursday, April 14.

He further said that Caracas will half the debt of the other Organisation of Eastern Caribbean States countries that are members of PetroCaribe, which will be reset to offer fuel at 35% discount to participating countries.

Gonsalves said he met on Monday with Venezuela’s President Nicolas Maduro, who also pledged homes for people affected by last year’s volcanic eruption as well as fertiliser for farmers.

The prime minister spoke at a ceremony at Argyle International Airport to welcome back Conviasa, Venezuela’s national carrier, which is resuming weekly flights to St. Vincent.

He said that in Venezuela, he spent four days in hospital, during which he held meetings with the country’s vice-president, Delcy Rodriguez and Raul Li Causi, president of the ALBA Bank and vice-minister for the Caribbean.

He said that after leaving the hospital, he met with several other people, including Rodriguez and Li Causi.

The prime minister said that because of the nature of the discussions, he summoned Minister of Finance, Camillo Gonsalves, his son, to join the talks in Caracas.

Camillo, who is Minister of Finance in his father’s government, was in Washington at the annual spring meetings of the International Monetary Fund and the World Bank.

The prime minister said Camillo arrived in Caracas on Saturday morning and they had a number of meetings together, including with the ALBA Bank.

The prime minister said there were a number of detailed technical meetings in which Camillo had to participate, concluding Monday night with talks with Maduro.

“I outlined in Caracas not only the impact of COVID but also the terrible socio-economic impact of the volcanic eruptions last year followed by Hurricane Elsa, that President Maduro agreed to give 100% debt relief of our PetroCaribe debt.”

He said Kingstown and Caracas are tallying the precise size of the debt.

“That act of solidarity by Nicolas Maduro will long be remembered by the people of St. Vincent and the Grenadines,” Gonsalves said.

He said Venezuela also agreed to reduce by 50% the debt of the other OECS countries that are members of PetroCaribe.

“And this is a country that is under illegal universal sanctions by great powers. And that makes that act of solitary all the more touching and meaningful and we must recognise that across this entire Caribbean and the world.”

The prime minister said there would also be “a revival of PetroCaribe, which has been brought to a screeching halt effectively by certain sanctions.

“And that revival will see a discount with the participating countries in PetroCaribe of 35% of the price of fuel. And that is going to mean relief for the persons who consume electricity in St. Vincent and the Grenadines in a context in which the price of fuel is rising sharply since COVID and since the military activities in Ukraine.”

He said he had explained to Maduro the hardships that farmers are enduring with the increased price of fertiliser and urea.

“They do not have the fertiliser but they have the urea and they will provide, on a monthly basis, to us free shipments of urea. And for the roads that have been damaged by La Soufriere and by bad weather, he has agreed to provide us also free asphalt.

“And when I told him that there are some persons still without their houses being properly repaired and some which we are building and we haven’t rebuilt all the houses which are damaged or destroyed because of the volcano, he has undertaken to deliver to us up to 150 pre-fabricated houses to help the people in North Windward and North Leeward.”

Gonsalves said Maduro had asked him to tell the Garifuna and Calinago people that he very much loves the indigenous people who have suffered because of the volcanic eruption.

“So, my dear brother, Canon Ashton, you see what I mean when I said on the night of Holy Thursday, I felt a terrible pain in my side and I had to go to the hospital here on Good Friday to do all the tests and when the doctors say I must go on to Cuba or Venezuela to do my usual check-up, you understand the meaning, and I understand it: the Lord works in mysterious ways, his wonders to perform.