Gonsalves returns to St. Vincent after 4 days in hospital in Venezuela 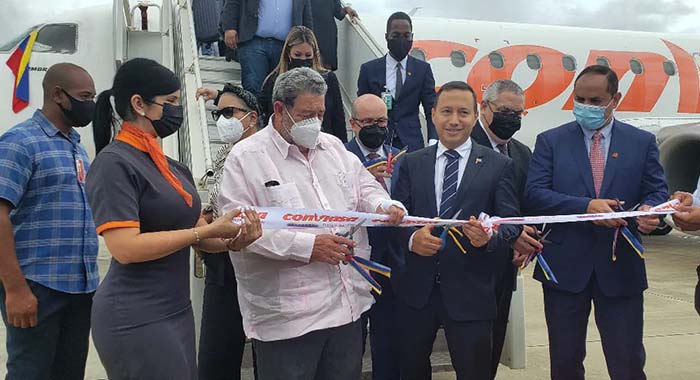 Prime Minister Ralph Gonsalves returned to St. Vincent on Tuesday, after 10 days in Venezuela, four of which were spent in hospital.

Gonsalves, who turns 76 in August, flew to Caracas on Easter Sunday, April 17, after complaining of a pain in his right side on Holy Thursday.

He returned to SVG on the first flight to the country by Conviasa, the flag carrier and largest airline of Venezuela, which will be flying from Caracas to Argyle once weekly.

“I want to thank all the doctors and nurses and the government and people of the Bolivarian Republic of Venezuela for their kind assistance in helping me restore my health very much.”

Gonsalves also thanked Vincentians and people across the world who expressed solidarity with him in “the time of my brief incapacitation” and for their prayers and their support.

“Equally, I am sorry to disappoint — or maybe I am pleased to disappoint those who don’t quite have my interest at heart and who had me dead. I am sure that you notice that the reports of my death have been greatly exaggerated. I am in good health. “The questions which my doctors in St. Vincent posed … were interrogated thoroughly in Venezuela and other queries about my health were interrogated and I am pleased to say they all have been answered favourably toward me. Those who anticipate that I am about to kick the bucket, I am around; very much around. Thank you, very much, almighty God.”

A question that might be lingering in the minds of Vincentians though, relates to the reason for what appeared to be a bandage on the prime minister’s left hand.

The prime minister said nothing about the apparent bandage during his address at the airport.

5 replies on “Gonsalves returns to St. Vincent after 4 days in hospital in Venezuela”