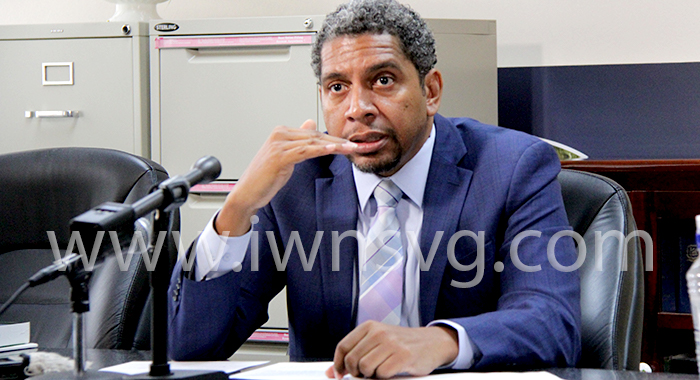 Minister of Finance, Camillo Gonsalves announced the measures at a press conference in Kingstown on Thursday, April 28, 2022.

Vincentians will, on Sunday, see some ease on the high fuel prices, with the implementation of a government policy that would slash prices at the pump at a time when an increase is overdue.

Minister of Finance, Camillo Gonsalves also told a press conference in Kingstown, on Thursday, that as of May 1, the excise tax on fuel will be halved.

He told the joint press briefing with Prime Minister Ralph Gonsalves, Minister of Agriculture Saboto Caesar and Minister of National Mobilisation, Orando Brewster that as of March, the average cost of diesel at the pump in the Eastern Caribbean Currency Union was EC$15.76 a gallon.

Gasoline was averaging EC$14.83, whereas in Barbados, which is outside the currency union, consumers pay EC$21.10 a gallon.

“So, already as prices increase, we have the cheapest gas and among the cheapest diesel, not because we subsidise it but because those countries put more tax on it,” the finance minister said.

He said that once gas passes EC$15 per gallon, it starts to feel really expensive and people feel it more in real and psychological terms, even though in 2008 gas reached $16.

The finance minister said that the government has decided to look at the excise duty on fuel.

In real terms, this is about EC$2.10 of every gallon of diesel and EC$3 for diesel.

He said that the government will be halved.

“We are trying to hold the line against the increases by reducing this excise tax by 50%,” the finance minister said, adding that taxes account for about 18.75% of gas prices at the pump.

Meanwhile, the prime minister said that had the government increased the price of fuel in keeping with the rolling average, gasoline would have gone past EC$15 a gallon 10 days ago.

He said consumers should have been paying EC$1.38 more on gasoline and 88 cents more on diesel.

However, since the government was working out the revision announced on Thursday, it decided to “eat the cost,” the prime minister said.

The finance minister said that the government was also looking for a way to reduce the taxes charged on cooking gas.

The only other thing that the government can reduce is the customs service charge.

This will be eliminated for the next three months but will only reduce the price slightly.

Therefore, in area 1, which comprises Kingstown and its environs, consumers will save between EC$8 and EC$10 on a 100lb cylinder of cooking gas, while the saving on a 20lbs cylinder is about EC$2.

“That is the only mechanism  we have within the tax framework,” the finance minister said.

The prime minister said that if the government were to increase the price of cooking gas on the basis of the rolling-three-month-average, the price of a 20lb cylinder would have moved from EC$42.05 to EC$44.40.

“… but when Camillo implements this, the increase will not be $2.35, but 35 cents,” the prime minister said, adding that similar decreases will be seen, proportionately, in the other zones.

The finance minister noted that the increases announced on cooking gas will not impact transportation costs.

He said that the government does not subsidise gas in SVG and imports it at whatever the cost.

“… to subsidise it would be to implement an unsustainable drain on the economy,” the finance minister said.

“We know that these things are not a panacea but you know that it is a small government dependent on the importation of things that are getting more expensive.”

The finance minister said the government will also waive the customs service charge on all fuel bought by VINLEC — the state-owned and sole commercial generator of electricity.

This, he said, would result in a reduction in the fuel surcharge that is passed on to the customers.

He said that this will be reviewed after three months, during which time the government is expected to lose EC$500,000.

When the revenue that is lost at the pump is factored in, the government is expected to lose about EC$934,000 monthly or just under EC$3 million during the three-month period.

The finance minister said the government is trying to give some relief on electricity, to the travelling public and everyone who cooks in their own home.

He said the International Monetary Fund has said that a lot of the variables relating to the energy sector are dependent on how long the conflict in Ukraine lasts.