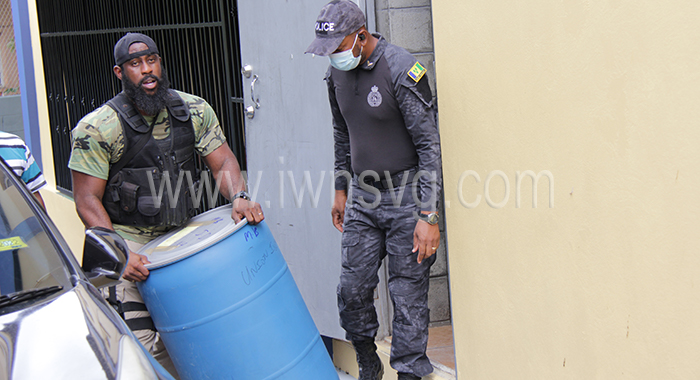 Police officers remove the barrel which is said to contain the cocaine from the Serious Offences Court on Wednesday, April 27, 2022.

A Union Island woman is slated to be sentenced today (Thursday) on charges relating to 38,707 grammes (38.7 kgs) of cocaine, allegedly found in a barrel on the southern Grenadine island.

On Wednesday, at the Serious Offences Court, Zipporah John, 32, of Ashton, originally of Barrouallie, pleaded guilty to charges that on April 25, at Union Island, she had the drug in her possession, and that she had it for the purpose of drug trafficking.

The drug was allegedly found in the blue plastic barrel, in which it was brought to court on Wednesday.

At the arraignment, Sergeant Atnel Ash asked the court to adjourn facts and sentencing until today, so that a representative of the Office of the Director of Public Prosecution could be present.

Chief Magistrate Rechanne Browne said that the facts could be read at yesterday’s arraignment.

However, Connell said that the sentencing should also take place, adding that the DPP has no role in sentencing.

Browne, however, said that the prosecution would have to make representation regarding sentencing.

She noted that John had entered a guilty plea, but added that the prosecution usually makes representation on sentencing.

Connell told the court that the DPP’s office is well equipped to be represented at court on Wednesday — which is usually reserved for traffic matters.

The chief magistrate, however, said that she is aware that prosecutors are involved in a workshop that has been going on for three weeks.

The chief magistrate further said that some members of the DPP’s staff are assigned to the High Court and said that the facts would be read and sentence passed today.

She then asked whether there was any objection to bail and Ash objected.

However, before he was able to give the grounds, Connell argued that the prosecution did not send a representative to court but was objecting to bail.

“Now I can say, ‘Only St. Vincent’,” he said, an expression he had taken back earlier in relation to the prosecution and representation regarding sentencing.

“What are the grounds, may I ask? She has pleaded guilty,” he asked Ash.

The chief magistrate remanded John to prison saying that the bail amount would be substantial and she did not know whether the defendant would be able to rally someone before Thursday’s sentencing.