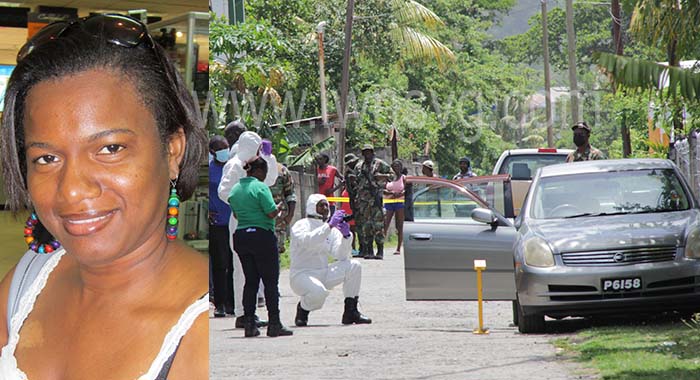 Homicide investigators in Buccament Bay, where the body of Luann Roberts, inset, was found in her car on Sunday, May 1, 2022.

Police have taken a man into custody as part of their investigations into the death of a Harmony Hall woman, whose body was found in her car in Buccament Bay, Sunday morning.

The death of Luann Roberts, a counsellor at the Family Court, brought to three the number of suspected homicides in St. Vincent and the Grenadines this weekend.

iWitness News understands that police are working with a theory that Roberts may have been killed elsewhere and her body transported to Buccament Bay.

Sources said that police launched a major operation after receiving information sometime after 6 a.m. that a man had assaulted a woman in Richland Park.

During the assault, the man is said to have told the woman that he had killed Roberts and left her body in her car.

During the police operation, Robert’s body was found in the back seat of her car, P 6158, a silver Nissan Skyline, which was parked about 100 feet from the perimeter wall of Buccament Bay Secondary School.

One Buccament Bay resident told iWitness News that the car was not in the area when he went to the beach shortly after 6 a.m. Sunday.

He said he saw the car there on his way home around 8 a.m., but paid it no special attention until he saw police officers swoop down on the area around 9 a.m.

At the scene, homicide investigators, including crime scene specialists, removed what appeared to be a mattress cover and other bedding items from the back seat of the car, before removing the body.

Some of the items appeared to be bloody.

Plainclothes police officers formed a line across the road in an effort to obscure the view of onlookers, who were standing outside the police cordon.

A man, said to be the suspect, left the scene in the backseat of a police vehicle, sandwiched between two officers.

Roberts’ death follows that of Kishroy Duke, 24, and Vandyke Duke, 42, of Choppins on Friday and Saturday, respectively.

Both men died after being shot.

iWitness News understands that an altercation broke out during a football match between Glen and Choppins, at the Calliaqua Playing Field, the regional capital of East St. George, in which all three communities are located.

As a result of the altercation, the referee called off the game, as there was some pushing and tugging among the players.

As the Choppins team was making their way home sometime after 8 p.m., gunfire rang out in Golden Vale, leaving Vandyke dead on the spot.

Kishroy was transported to the Milton Cato Memorial hospital, where he died on Saturday.

The Labour Day weekend killings bring to 13 the number of homicides in SVG this year.

Roberts is the second Family Court worker to be killed in SVG over the last decade.

On Sept. 5, 2013, Velorne Samuel, 36, the secretary at the Family Court, died after being shot multiple times at her rented home in Evesham.

Correction: Roberts’ death brought the homicide count to 13 and not 11, as initially reported.