Roadside slaying is SVG’s 4th killing in as many days 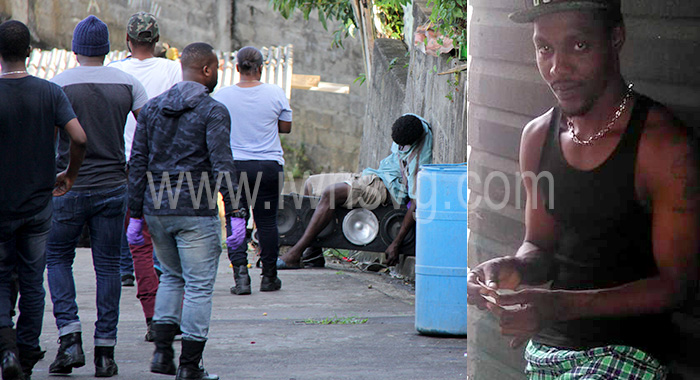 Homicide investigators at the scene, in Kingstown Park, where the body of Keon Phillips, inset, was found on Monday, May 2, 2022.

St. Vincent and the Grenadines recorded its fourth homicide in as many days with the death of a man whose body was found in a sitting position on a portable speaker box at the roadside in Kingstown Park on Monday morning.

The man has been identified as Keon Phillips, 35, a resident of the Central Kingstown community, who is originally from elsewhere in the country.

His death brings the homicide count in the country to 14.

Residents have speculated that Phillips’ assailant(s) snuck up on him as he played music loudly during the night.

People who saw the body told iWitness News that it appeared to have a gunshot wound to the head.

Residents have speculated that the sound of the gunfire might have been masked by the loud music that Phillips had been playing in the community during the day and into Sunday night.

People outside the police cordon commented that several villagers had asked him to move from their gates with the loud music on Sunday.

One villager said she, too, was annoyed by the music but declined to comment to Phillips about it out of fear that he would have cussed her out.

iWitness News understands that Phillips had expressed fear for his life after being shot at over the past few weeks.

“Imagine somebody shot at he recently and he sitting there in the night at the side of the road,” one person commented.

Another woman, commenting from a balcony of an upper floor of a house overlooking the crime scene, noted the number of killings in the country.

“We are beating all the Caribbean islands. This is number four in four days. Four deaths in St. Vincent in four days — homicides. My God! No more the normal deaths, eh?” she said.

Phillips’ death follows that of Luann Roberts, of a Harmony Hall, whose body was found in her car in Buccament Bay, Sunday morning.

iWitness News understands that police are pursuing a theory that Roberts, a counselor at the Family Court, may have been killed by a man close to her.

The man is in police custody and police are investigating a report that the same man allegedly assaulted a woman in Richland Park, on Sunday.

On Saturday Kishroy Dyke, 24, of Choppins died at the Milton Cato Memorial Hospital, where he was being treated for gunshot wounds that he sustained in Golden Vale on Friday.

Vandyke Duke, 42, also of Choppins, who was shot in the same incident died at the scene.

The latest deaths bring the homicide count to 14.