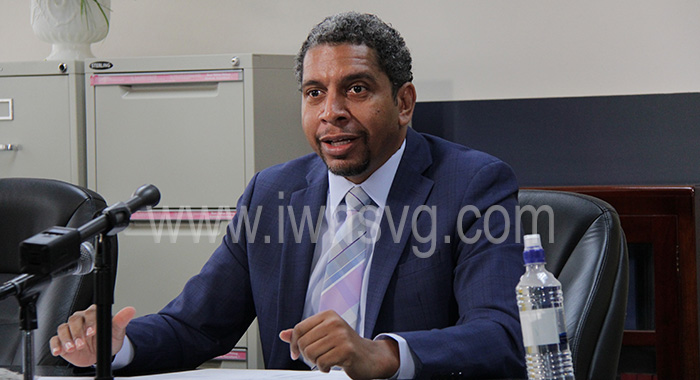 Minister of Finance, Camillo Gonsalves speaking at the press conference in Kingstown on Thursday, April 28, 2022.

The acute referral hospital at Arnos Vale is expected to cost US$82 million, US$32 million more than the initial estimates.

Minister of Finance Camillo Gonsalves said the hospital was the headline issue for St. Vincent and the Grenadines (SVG) at the World Bank and International Monetary Fund meetings in Washington last month.

The government has announced plans to construct an acute referral hospital, in Arnos Vale, at the northern end of the site of the decommissioned ET Joshua Airport.

“And over the last couple of years, we have been engaged with the World Bank to design the hospital, to do the necessary geological and environmental surveys to find out exactly what is necessary in terms of services to be offered at the hospital and staffing and all of these things,” the finance minister told a press conference in Kingstown on Thursday.

He said all of that preliminary work and the design was done, and the estimated cost was US$50 million.

“But, as everybody knows, since COVID and since the conflict in the Ukraine, prices have risen tremendously, particularly prices for construction.

“And when the World Bank visited St. Vincent and the Grenadines earlier this year, about a month and a half ago, the latest costings of the hospital project were in excess of $82 million.”

He said the government had to negotiated with the World Bank ways in which the original $50 million allocation could be increased within the limits of what they can lend SVG and where Kingstown could find additional monies to make up any gap that still remained.

“So we had very, very fruitful meetings on the hospital. The World Bank has pushed their allocation from this initial 50 to a number approaching $68 million. And I want to express tremendous gratitude to the World Bank for making these additional allocations and for indicating the flexibility that they did and the understanding that they did about the challenges that have come up because of conflict and COVID,” Gonsalves said.

He said that Kingstown had identified additional sources beyond the World Bank, where the remaining monies could be sourced.

“So the World Bank is going to take their proposal to their board in July. We expect to have the World Bank approval, final approval. They’ve already done multiple preliminary approvals, but we expect the final approval in August. And then, at that point, we will be able to do the procurement of the services,” Gonsalves said.

“So, it will take a few months to tender the project, for people to bid, for us to select a contractor and all the rest of it. So, we are fairly optimistic, we’re confident that very, very early in 2023 — early January, February of 2023 — we’ll begin construction of the acute referral hospital in Arnos Vale.”

He said the issues the World Bank is working on relate to the management of the hospital.

The finance minister said that the World Bank will return to SVG in the coming weeks.