The mortality of Ralph and the death of the ULP 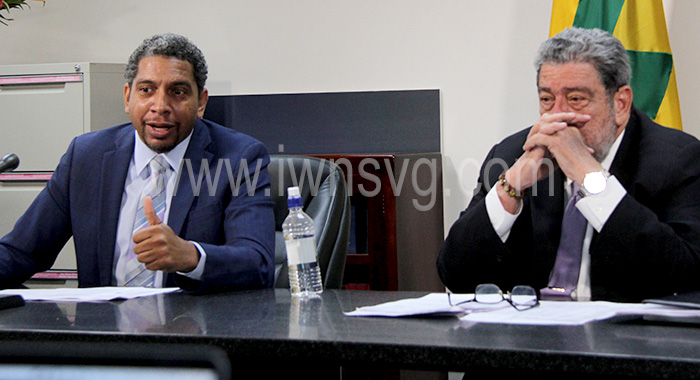 Prime Minister Ralph Gonsalves and his son, Minister of Finance Camillo Gonsalves at a press conference in Kingstown on April 28, 2022.

This piece is not meant to speak ill of anyone, and although it may be perceived as being pessimistic, I invite rational minds to hear me out:

Ralph is old. By way of biology, like it or not, he is not getting any stronger.

We have all over the years witnessed the prime minister degenerating and it is obvious that the weight of not having a successor also plagues him. Let us be honest, in the past few years Gonsalves, who in the past was able to speak for hours on end, is currently unable to make it through an entire day of Parliament. In fact, he barely makes it through half a day sometimes. Now he takes breaks so frequently that one cannot help but notice.

Within the past three years, the frequency with which we are told that Dr. Gonsalves is travelling for medical attention is worrying to say the least. I’d like to think that he needs and wants to rest, but just like he has failed the nation, he has also failed his party in failing to groom a successor.

Does the ULP have a shortage of leadership candidates? I think not! What they are short of, however, are formidable candidates. Indeed, Gonsalves’ larger-than-life personality, which apparently caused many to gravitate towards him, now seems to be the very quality that will be his undoing. What seems crystal clear at this point is that the eventual exit of Dr. Gonsalves from the political stage, will also signal the death of the cult he has created — the Unity Labour Party.

Gonsalves succeeded in securing his position over the years b either demoting, resigning, or simply outlasting all other potential challengers: Rene, Girlyn, Straker… Those who are hopeful now — and more so, perhaps, his most favoured to succeed, his eldest son, Camillo, just don’t make the cut. ‘Mill” is simply not viewed as prime ministerial material by a significant majority of the electorate. Even when given one of the most important ministries to help “prop him up”, Camillo just comes up short. The rest in the pack are not even deserving of any analytical consideration at this point since. Like Camillo, they simply do not have what it takes to lead a country!

Honestly, at the rate at which he’s going, it doesn’t appear as if the septuagenarian can go on for much longer. It appears that Dr. Gonsalves wants to die in office, literally and figuratively. His inability to handover even after slowing down significantly shows no one in the ULP is capable. The question facing us now is this:

Whither goes the ULP with Ralph?

*Esteban is an undergraduate student of economics and banking at the University of the West Indies, Mona.