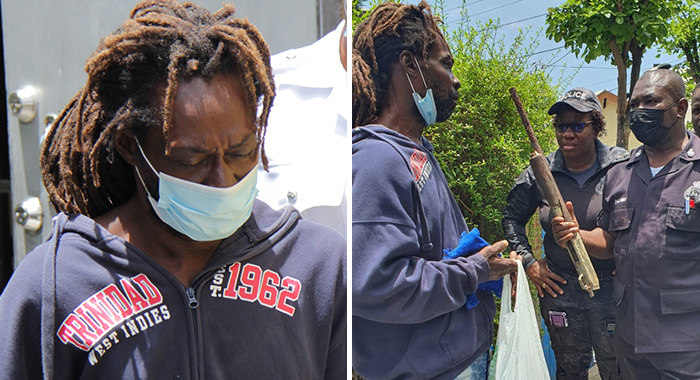 A composite photo of the defendant, Barry Antoine, outside the Serious Offences Court, left, and in conversation with police officers after handing over the “firearm” to them in Layou on Thursday, May 5, 2022.

A Layou man today (Thursday), handed over a rusty object resembling a firearm to police about an hour after he was fined EC$9,000 for possession of 16 rounds of 12 gauge ammunition without a licence.

On Tuesday, at the Serious Offences Court, Barry Antoine, 42, pleaded guilty to a charge that on Monday, at Layou, he had the unlicensed ammunition in his possession.

Police Constable 967 Miller, who was on mobile patrol duty, arrested Antoine in the Central Leeward town about 5:40 a.m.

The court heard that as the officer approached, Antoine began acting suspiciously.

Miller requested a search and found the ammunition in a purple backpack that Antoine was carrying.

When cautioned, he told the officer, “The shots are mine. I buy them from a man this morning for $150.”

Antoine further told police that he had an unlicensed firearm.

He gave a statement in the presence of Justice of Peace Daniel Jackson, admitting to the ammunition offence.

Chief Magistrate Rechanne Browne sentenced today, one day after his lawyer, Grant Connell and prosecutor Station Sergeant of Police Renrick Cato made submissions to the court.

At the commencement of the sentencing hearing, Connell told the court that on the last occasion, he had mentioned a shotgun to which Antoine had claimed ownership.

He said neither the prosecution nor police examine the merits of what people are saying.

The lawyer said any firearm on the nation’s streets is a possible loss of life.

Connell noted that Assistant Superintendent of Police Oswin Elgin Richards, head of the Major Crimes Unit, recently said there is a problem of illegal firearms in St. Vincent and the Grenadines.

There is no sense to state the obvious of a problem and not tell us possible solutions, Connell said, adding that if the issue is to be resolved, people have to start thinking outside the box.

He said that in ight of that, he had asked the prosecutor about the possibility of extending some sort of amnesty to Antoine should he surrender the firearm.

The lawyer said Antoine could get the firearm to the police and asked the court to consider “this act of good faith” when passing sentence.

Hesaid Antoine is a farmer who has 40 pigs as well as cattle to attend to and could fall a victim of praedial larceny if sent to prison.

“Although I am on this side of the fence and the police on the other, I am also a part of the society,” Connell said.

He said he was willing to play a role in ensuring that the firearm is handed over because sometimes the “police and public do not have that chemistry as they did many years ago”.

Connell asked the court to impose a fine on Antoine and give him a few days to sell off the pigs to pay it.

Surrendering firearm ‘a plus’

In his submission, Cato said it would be a “plus” if Antoine was willing to hand over an illegal firearm to the police.

“In getting a firearm off the street we can be saving more than one life,” the prosecutor said.

He said he would assist in facilitating the hand-over of the firearm.

“That consideration has to happen today,” the chief magistrate said, adding, to the prosecutor, “It has to be facilitated by you.

“It is the police who will be going with Mr. Antoine to retrieve the firearm or firearms and I am depending on you to deal with that.”

But Connell said he was just expressing the concerns that sometimes “police sometimes get an orgasmic effect when they go in certain areas.

“I don’t want them to get that organism effect and get excited.”

“I want to make sure Antoine knows the police will be there,” the chief magistrate said.

The lawyer then asked if he could suggest which police officers go to retrieve the firearm.

“The prosecutor will control that because with guns, innocent people always lose their lives.”

Browne said that Antoine was open and said he has a firearm.

“The police can go themselves and retrieve it and could result in a different set of circumstances and him being brought before the court,” the chief magistrate said, adding that as the prosecutor suggested, Antoine’s handing over of the firearm seems to be a workable arrangement.

Cato said he would facilitate the process after the sentence is handed down.

In her sentencing remarks, the chief magistrate said that in dealing with ammunition offences, she has always said that where there is ammunition, there is a firearm.

“The facts bore witness to that,” she said.

After considering the sentencing guideline, he began with a starting point of 40% of the maximum fine of EC$20,000.

She said the aggravating was that the ammunition was in a public place and Antoine, of his own volition, had admitted to having a firearm.

Mitigating was the fact that Antoine was cooperative with the police.

After considering the aggravating and mitigating feature, she added EC$2,000  to the fine.

She said that aggravating for the offence is that he has previous convictions of a similar nature, and recent convictions, while the remorse he showed at all material times, mitigated on his behalf.

The court felt that the aggravating and mitigating features of the offender balanced out each other.

However, Browne said that the court being mindful of its precedence and those of the Court of Appeal will take the sentence up to EC$9,000, to be paid by Aug. 2, or eight months in prison

“$9,000? Your honour, something must be given for what must be the first of this nature for surrendering a firearm,” Connell said.

“If this firearm is surrendered, he is not charged for it. That is significant, given that he has just come off a custodial sentence of five years and six months,” Browne said.

She said the court had taken into account that Antoine is trying and is farming, adding that she is not going to pretend not to know that praedial larceny is a possible problem for farmers.

“The court would want to give him an opportunity to continue on the path that he has set,” she said.

However, Browne said that Antoine also had cattle, adding that one might fetch EC$5,000.

Connell said that not even the buyer from Grenada pays that much.

“That’s why the court did not say anything forthwith, taking into consideration the circumstances surrounding this. Fortunately, I had already considered giving him until Aug. 2, or eight months.

“Mr. Antoine, the onus rests on you to make the payment. The police will escort you,” she said.