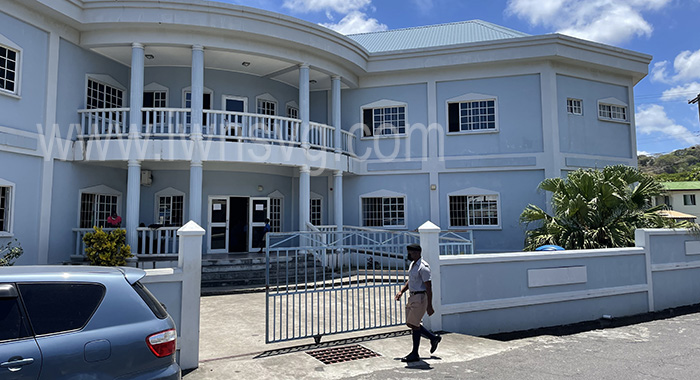 A police recruit walks past the Calliaqua Town Hall building on Wednesday, May 11, 2022. The magistrate is located on the left section of the ground floor of the building.

Magistrate Zoila Ellis-Browne has made it clear to police information technology specialists that she wants functioning audio-visual equipment at the Calliaqua Magistrate’s Court, on Monday, when a trial continues there.

On Thursday, the magistrate adjourned the trial of former police officer Zackrie Latham, 26, around 5:40 p.m. because of problems with the audio-visual equipment.

The court was attempting to view an electronic interview that police conducted with Latham last June during investigations in the alleged theft of firearms and ammunition from the Georgetown Police Station.

The previous day, a video was played in court, but there was no sound, and the prosecutor, Crown Counsel Maria Jackson-Richards, expressed frustration at the low volume.

The sound from that video was somewhat better when it was replayed in court on Thursday, when external speakers were brought to court.

However, when the electronic interview was played, the magistrate, as well as the defence counsel, Grant Connell, said they could not hear what was being said.

“Don’t you have a Bluetooth speaker or something that these young people have all over the place? This is the police force,” Ellis-Browne told the police I.T. specialist.

She was referring to the compact speakers that many teenagers carry in their backpacks to play music, often to the annoyance of their educators and passers-by because of the loud volume of the devices.

The magistrate stood closer to the speaker in an attempt to hear what was being said in the interview but this did not seem to be of much use.

Then, the video began to stick and the technician explained that the equipment belonged to the Serious Offences Court as the Police Department does not have any of its own.

“So it’s worse than I thought,” Ellis-Browne said and suggested that they buy some equipment from a store in Kingstown.

Despite that the court is located in a purpose-built space in an EC$2.5 million building that opened in October 2017, the courtroom would not have been out of place a century ago as it contains none of the equipment that one would expect to find in a modern court.

Apart from having no resident audiovisual equipment when a wide selection of such equipment is available at increasingly lower prices, none of the three air conditioning units are functioning. Users of the court must therefore endure searing heat during proceedings

And since there is no permanent or temporary audio-visual equipment at the court and none permanently assigned to the police department, I.T. specialists are forced to borrow from the Serious Offences Court, located in Kingstown.

The Kingstown Magistrate’s Court has its own audio-visual equipment but iWitness News understands that those were obtained through the personal efforts of Senior Magistrate Rickie Burnett.

The units have not been functioning for months, iWitness News understands.

As a result, the court has to operate with its doors and windows open, which results in noise pollution from roadway traffic and activities in other parts of the building, which also houses a preschool, the town hall, post office and library.