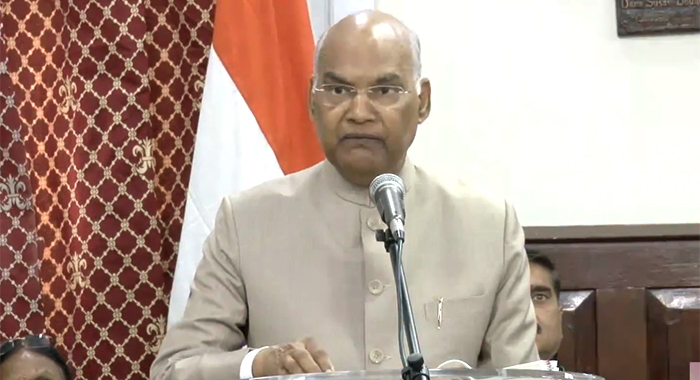 President of India Shri Ram Nath Kovind addresses the Vincentian Parliament on Thursday, May 19, 2022, during an official visit to St. Vincent and the GRenadines.

India’s president, on Thursday, told the St. Vincent and the Grenadines Parliament that while the globalised world has brought immense benefits to people internationally, it has brought new challenges that could be addressed by nation’s looking narrow self-interest.

“Today’s closely-connected world has brought immense benefits to people around the globe through opening up of new markets, new educational and employment opportunities, greater access to information and new vistas for countries to engage with the outside world,” Shri Ram Nath Kovind told a special sitting of Parliament to commemorate his official visit to St. Vincent and the Grenadines.

“This globalised world order has also brought its own set of challenges. Climate change, political conflicts threatening international peace and security, cross-border tourism supply chain disruptions are some of the major global challenges that impact us all. Nation states would have to look beyond their narrow self interests in tackling these challenges for the well being of our future generations.”

Kovind told the sitting, which also heard addresses from Prime Minister Ralph Gonsalves and Opposition Leader Godwin Friday that multilateralism “is more relevant in today’s interconnected and interdependent world than it was at any time in our shared history.

“Multilateralism ought to be used as an instrument to promote a strong, sustainable, balanced and inclusive growth in all nation states.”

He, however, said institutions need to be reformed for multilateralism to remain relevant and effective.

“The structures and institutions that emerged after the two World Wars focused on one major issue: that of preventing another world war.  To tackle the complex issues of today the New World Order that we seek to build is to be an inclusive world order, where every country can express its legitimate interests. This can only happen by way of an expanded and better-designed representation system in key global institutions.

“It is important therefore, to ponder upon and examine whether the current world order with the United Nations and its institutions is adequately serving the global community in addressing these complex challenges. Our objective in advocating for an inclusive world order is to promote a universal rules-based, open, transparent, predictable, non-discriminatory, and equitable multilateral system.”

Kovind said the “need of the hour is, therefore, reform of global institutions with the UN Security Council at its core to reflect the contemporary global reality”.

He said that this issue, India and SVG “share common interests, approach and understanding,” nothing that both countries are part of the 42-member developing countries platform of the L.69 Group of Developing Countries.

The Indian head of state said that the group is actively pushing for reforms of the UN Security Council through an expansion in both permanent and non-permanent categories of membership.

“I congratulate St. Vincent and the Grenadines for the stellar role it played in advocating for a meaningful and time-bound progress in the inter governmental negotiations process and Security Council reforms during its membership of the Security Council for the years 2020-21,” he said.

Kovind said that as India celebrates 75 years of independence, it is taking “our engagement with the world in line with our philosophy of the world is one family.

“This also demonstrates India’s approach in the global arena, which means India believes in an inclusive world order that is sensitive to legitimate interests and concerns of every country and region, irrespective of its size or wealth,” Kovind said.

“We think and act for the future of entire humanity. India has remained steadfast in its commitment to share its experience, knowledge and skills acquired in its journey of development, with fellow developing countries. I am confident that India and St. Vincent & the Grenadines will continue to work closely together in advancing these shared objectives for an inclusive world order.”

Kovind noted that his is the first visit by and Indian President to SVG, adding that both countries have historical relations established by their forefathers even before both countries had become independent.

“We are both multi-racial societies with a common history of British colonial rule. Our friendship is rooted in our common historical and cultural heritage as well as our shared values of democracy, inclusion, freedom and the rule of law.”

He said bilateral engagement between New Delhi and Kingstown has blossomed in the last few years, adding that Gonsalves’ visit to India in September 2019 “infused new energy into our relations.

“I am glad to note that projects such as the Bequia Market Repairs and Restoration, the Community Development Project for Glenside Village, Marriaqua and the Rehabilitation and Transformation of the Chateaubelair Agriculture Depot into a processing and training facility have either been completed or are at an advanced stage of completion.”

He said India has stood by SVG during this COVID pandemic as  well.  “As a symbol of our solidarity with the people of St. Vincent & the Grenadines, a shipment of life saving drugs and protective gear were dispatched at the start of the pandemic. India had also sent Made in India Covishield vaccines last year.”

The president said India engages with SVG at the regional level in CARICOM, which he said has a more than one million-strong Indian diaspora.

Kovind expressed appreciation for SVG’s active participation in the various activities on India’s agenda with CARICOM.

“We deeply value our ties with CARICOM which is one of the oldest integration groupings in the region. India will continue to partner with this regional mechanism in addressing the challenges on the front of development and other issues.”

He said the world is characterised by multiple linkages among nation-states and people across the globe.

“Today, more than ever before in human history, the international community is linked together at multiple levels: modern supply chains make economic inter-linkages deep; technology has no borders; our families and friends live across the globe; and we all are consumers of global products and services,” Kovind said.

“The trans-continental migration of people, going back many centuries now, adds a special dimension to this global connect. The presence of Indo-Vincentians is a fine example of this connection. People from India who came here in the 19th Century as indentured labour, subsequently became an integral part of your society,” he said.