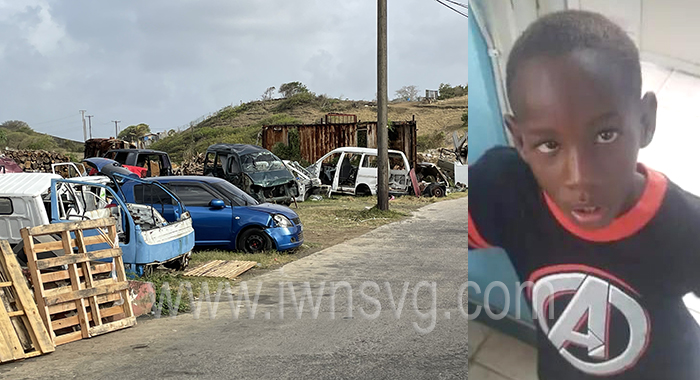 The blue car in which the body of Lenny Lewis was found in Diamond on Thursday, May 19, 2022. (Lenny Lewis photo courtesy ANN)

Residents of Diamond are hoping that an autopsy would help to unravel the mystery of the death of a 7-year-old boy whose decomposing body was found in a car in the village on Thursday.

The boy’s mother, Anella Lewis, 33, of Diamond, told iWitness News that he is Lenny Lewis, a Grade 1 student at the Stubbs Government School.

Lewis last saw her son alive on Monday, but multiple villagers told iWitness News that they saw him and an older brother, who is not much his senior, about the village on Tuesday.

The body was in the front seat of a damaged car that is awaiting repairs at a roadside garage along the road to the Diamond Landfill.

The owner of the car, said to be a police officer, sent someone to check on the progress of the repairs on the vehicle, which has been at the garage for weeks.

The person reportedly noticed some marks on one of the panes of glass in the heavily tinted vehicle and looked inside and saw the decomposing body.

Lewis told iWitness News at the scene that Lennie is the penultimate of her nine children, the youngest of whom is a few months old.

She said that she had not seen her son since Monday and was hoping that he would come home by Thursday evening, failing which she would have gone to the police.

Lewis said she had gone to her cousin’s to see if Lennie was there.

“He would be all over the place. People would give him things,” she said, speaking in the Vincentian vernacular.

Lewis said that sometimes her son “sleep by me and he does sleep up ah top house up ah me house”.

She said he also sleeps at his friends’ and “down ah bayside”.

Lewis said Lennie did not go to school on Monday and she was looking for him to send him to school on Tuesday but did not find him.

She said she was worried about him but afraid to go to the police “because the boy ‘custom come home”.

Lewis said she had decided that if he had not come home by Thursday evening she would have filed a report with the police.

She said that sometimes Lennie would come home in the morning or by 7 or 8 p.m.

She said she was in Kingstown on Thursday organising her “daughter at the Family Court” along with her cousin with whom the daughter lives.

When Lewis returned to Diamond, another cousin called her and told her that a dead boy was found in a car.

“I tek off me shoes and run come down to see what really going on. When me come, is me son.

“I don’t feel good about it,” she said, adding that a villager had told her that she had seen Lennie on Monday with a bowl of fish and she told him to go home but he didn’t.

“First time days, me used to beat him fuh he stop sleep out,” Lewis told iWitness News, adding that she used to beat her son each morning he returned home after sleeping out.

She said she could not say where her son would sleep. “Sometime, he sleep by he friend them.”

Meanwhile, some villagers told iWitness News that Lennie and his siblings would be about the village all the time.

One villager said that Lennie would sleep either under or in cars in the area.

They said that he would go to various houses and ask for food and villagers would willingly give.

Villagers have speculated that Lennie might have fallen sick after eating raw robin fish that he had on Tuesday, despite warning and attempts to prevent him from doing so.

Other villagers speculate that Lennie might have been unable to exit the car and might have suffered a heat stroke.

One source told iWitness News that all of the doors of the car were locked but the trunk was open.

Villagers expressed hope that his death was not the result of foul play.

Lennie is the second minor to have been found dead in St. Vincent in exactly one week.

Last week Thursday, May 12, the decomposing body of a female, identified four days later as that of Precious Williams, 17, of Sion Hill, was found in a bag in Richmond Hill.

A post mortem concluded that she died of multiple injuries inflicted with a sharp object.