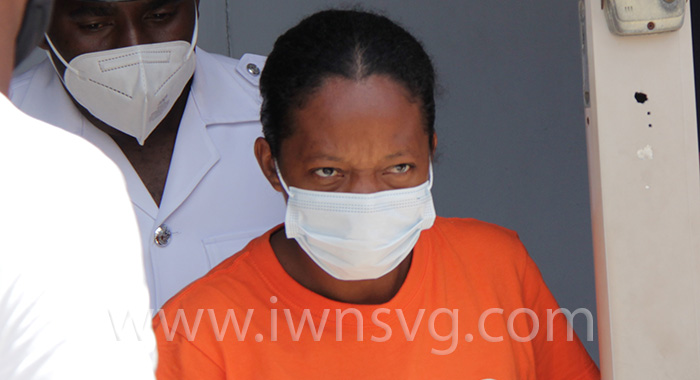 The accused, Fiziela Clarke outside Kingstown Magistrate’s Court on April 22, 2022.

A Sandy Bay woman who was, in 2020, found not guilty of a charge that she stole EC$1527.50 from the Government of St. Vincent and the Grenadines (GoSVG), has been slapped with eight similar theft charges amounting to EC$220,093.62

Clarke, a former employee of the Minsitry of Agriculture, is charged that:

Clarke appeared before the Georgetown Magistrate’s Court on the Tuesday and plead not guilty to the charges.

She is to  report to the Sandy Bay Police Station every Monday between 6 a.m. and 6 p.m., and surrender her travel documents to the court. The court also ordered that stop notices be place at ports of entry and exit.

The  cases were adjourned to Sept. 5.

On April 22, Clarke appeared before the Kingstown Magistrate’s Court, where she pleaded not guilty to charges that:

She was granted  bail in the sum of EC$8,000 with one surety and ordered to report to Sandy Bay Police Station on Mondays between 8 a.m. and 8 p.m.

The court further ordered that stop notices in Clarke’s name be placed at ports of entry and exit.

The matters were adjourned and transferred to the Georgetown Magistrate’s Court.