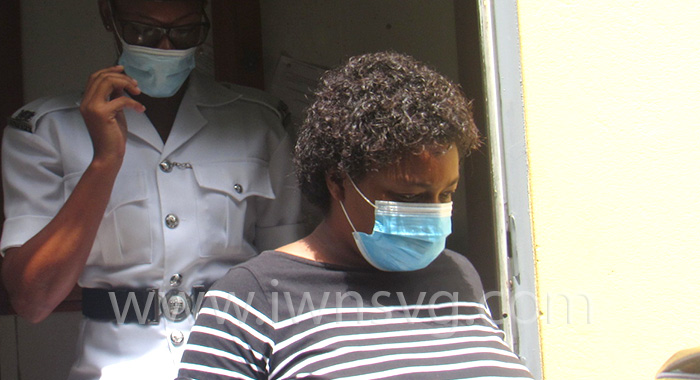 The defendant, Maruth Francois leaves the Serious Offences Court on Tuesday, May 24, 2022.

The hotel worker who, on Monday, pleaded guilty to a charge that she stole US$1,140 from a member of the Indian presidential delegation during their visit to St. Vincent last week has changed her plea to not guilty.

On Tuesday, the woman, who was unrepresented at her arraignment on Monday, appeared in court with Grant Connell as her lawyer.

The charge initially named her as “Maruth Francis”, but on Tuesday, Prosecutor Station Sergeant of Police Renrick Cato made an application that the name be amended to “Maruth Francois”.

Connell asked that the charge be put to Francois and she pleaded not guilty.

Sharma was a member of the advance party that came to St. Vincent to make arrangements for the presidential visit.

Connell asked the court for full disclosure and a short adjournment before trial.

Prosecutor, Station Sergeant of Police Renrick Cato did not object to bail and asked that the adjournment be short.

He informed the court that Sharma may be leaving St. Vincent as soon as  Wednesday.

The magistrate set bail in the sum of EC$5,000, with one surety and ordered that Francois surrender all her travel documents and that stop notices be placed at all ports of entry and exit.

Further, the defendant is to report to the Calliaqua Police Station every Wednesday between 6 a.m. and 6 p.m.

Connell asked that the court allow the defendant to keep at least one piece of identification but the magistrate denied this application, saying, “We’ll leave it as it is now.”

The matter was adjourned and transferred to the Mesopotamia Magistrate Court for May 27, 2022.

At the end of the day’s sitting around 10:30 a.m., the defendant had not posted bail.

On Monday, the chief magistrate remanded Francois into custody to allow the court time to determine her sentence.

On Monday, Francois had asked the court for time to repay the money, but the prosecutor said that she should be given a “short, sharp shock” of a prison sentence.