C’bean countries urged to have a presence at international fora 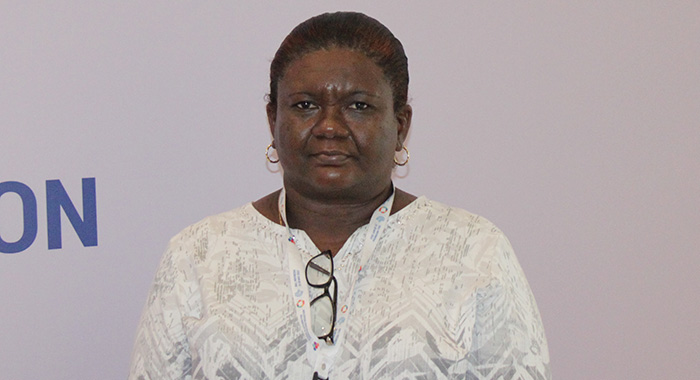 Michelle Forbes, head of the disaster management agency in St. Vincent and the Grenadines.

BALI, Indonesia (CMC) — The head of St. Vincent and the Grenadines’ disaster management agency, Michelle Forbes, says it is important for Caribbean countries to use their voices at international fora, such as the Global Platform for Disaster Risk Reduction, to outline their concerns.

“As a small island developing state and our increasing vulnerabilities and complexities we are seeing now with the various hazards that affect the Caribbean, it’s really important for countries like St. Vincent Grenadines, to really have a voice and be able to interact with the different agencies and with the UN system,” Forbes told the Caribbean Media Corporation (CMC).

Forbes said that it was disappointing that not many countries from the English-speaking Caribbean attended the event, which ended here on Friday and brought together an estimated  5,000 representatives of governments, the private sector and civil societies from 194 countries.

She said the meeting, which takes place every three years, was an opportunity for Caribbean countries to express their views and take account of the challenge as well as the gains made towards addressing the seven targets of the Sendai Framework.

The Sendai Framework for Disaster Risk Reduction 2015-2030 was the first major agreement of the post-2015 development agenda and provides member states with concrete actions to protect development gains from the risk of disaster.

“And I think we really need to have a voice here and have persons begin here to really share their experiences and actually speak about what we are doing in the region,” Forbes told CMC on the final day of the conference.

She said that Kingstown has just completed its midterm review of the framework, which measures nations’ performance on a global, regional and national scale.

“… we are seeing now the same changes that we’re making in St. Vincent in terms of looking at our end-to-end warning system, looking at the impact-based forecasting, which is really the way to go now, and we are have been kind of slowly going towards that and hopefully by 2023 with the Met Services we will be fully embracing the impact-based forecasting, looking at the similar colour codes to what you saw with the volcanic eruption — the green, yellow, orange and red.”

The conference heard that only 95 countries reported having multi-hazard early warning systems that give governments, agencies and the general public notice of an impending disaster, with particularly low coverage in Africa, Least Developed Countries (LDC) and Small Island Developing States (SIDS).

Early warning systems were cited as a critical defence against disasters such as floods, droughts and volcanic eruptions in the recent Global Assessment Report, which predicted 560 — or 1.5 disasters a day — by 2030 based on the current trajectory.

It comes after António Guterres, UN Secretary-General, called for the warning systems to cover every person on the planet within five years.

Forbes said the conference discussed advanced financing of disaster risk reduction, which she said is important for the Caribbean.

“We tend to not get resources before the hazard; we get it after the impact,” she said, citing the example of the volcanic eruption.

“Until people see a bang, something happening you see that the new city resources tend to be flooding in.”

Bali Agenda for Resilience, the forum’s outcome document, said that while there has been some progress, such as in the development of new financing mechanisms, and better linkages with climate action, the data still point to insufficient investment and progress in disaster risk reduction in most countries, especially in investing in prevention.

Disaster risk reduction as they relate to disabled people was also a  cross-cutting theme, Forbes said, adding that the focus should be inclusion.

“Our programmes tend to be geared towards able-bodied persons. And one of the advocates for the disabled person — Indonesia — made the case that all of the programmes they were speaking about, the prerequisite for taking part in the programme, you have to be able-bodied. What about the vulnerable persons?”

Forbes said this point was crystallised in St. Vincent last year, when 20% of the population was evacuated after the volcano erupted.

“We tend to assume that disabled persons or the vulnerable persons always have someone to evacuate with or to take care of them.

“But they have the right to also live by themselves. So how do we get them a bit more on board? How can we look at the messaging that targets a different population? And we’re actually moving towards some of it.”

Forbes said that in St. Vincent, some sign language is done “but it’s not enough”, adding that more work needs to be done with social transformation agencies to ensure that disaster risk reduction plans are more inclusive.

“… so that when we do disaster risk reduction, we talk about leaving no one behind, and all persons, all people, then the disabled must be included and those that have mobility issues, other challenges, other vulnerabilities”.

St. Vincent and the Grenadines was referenced at the conference in that in 2021, it had to deal with multiple hazards at the same time, namely the coronavirus (COVID-19) pandemic, an outbreak of dengue, the eruption of La Soufriere volcano, and the impact of Hurricane Elsa.

“I think you have to look at risk governance. It isn’t perfect, but I think we have invested significantly in our the risk governance in St. Vincent and the Grenadines, from the NEMO to the other units that have been working towards reducing  our risk and building resilience, whether in terms of climate change, looking at the COP 21, Looking at the SDGs.”

Forbes also noted that unlike many countries, St. Vincent and the Grenadines has a contingency fund.

“For probably the first time in a long time we have really been focusing a lot on the risk financing because we recognise as a country, we will continue to be affected by various hazards and we cannot just sit and wait until something happens to then find financing….

“So to deal with this complexity of hazards we have to look at the risk governance, the systems and frameworks and policies that we have that drive natural disaster management at a national level and across the sector’s and it’s not one it’s not one organisation only.

“It’s a multitude of organisations that make up this system and if everyone is not on board, it can affect how we manage the entire disaster mismanagement portfolio,” Forbes said.