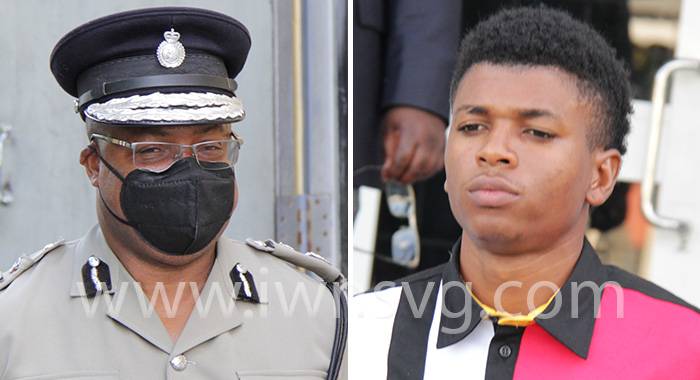 When the trial of Zackrie Latham, the former police officer charged with stealing guns and ammunition from the Georgetown Police Station last year, continues on Monday, his lawyer is expected to call Commissioner of Police Colin John as a witness.

At the last hearing, on May 17, Grant Connel asked the court to issue summons for the police chief.

“Because if the prosecution did not get him by their means, I will use a different method. Hopefully, he falls under that umbrella called the law of the land,” the defence counsel told the court.

Connell also made an application for summons for Assistant Superintendent of Police Francois, who was second-in-command of the eastern police division — where Georgetown Police Station — when the firearms and ammunition were allegedly stolen.

The lawyer has so far presented a defence that the police chief and other officers beat Latham and that is why he told investigators— including an electronic interview — that he was involved in the crime.

On May 17, Connell also asked Magistrate Zoila Ellis-Browne to issue summons for Dr. Foye, who he said attended to Latham at Milton Cato Memorial Hospital, where he was taken after complaining about pain in the ear after the alleged beating.

Latham was initially charged with 13 counts relating to the alleged burglary but the court upheld no case submissions on 10 of those counts.

Connell also asked for summonses for Police Constable 913 Jullet Jack and the cleaner at Georgetown police station, who he said is called “Browning”.

“To be more precise, she is ex-ASP Francis’ sister,” he told the court.

“I don’t think Francois is at Georgetown anymore. It is either Chateaubelair or Union.”
“Grenadines,” someone at the bar table said.

“Grenadines,” Connell responded. “That would be my guess.

Connell then told the court that he had contacted the commissioner of police’s office and was told that he would be out of state for 21 days.

The lawyer said he was not opposed to the police chief testifying remotely.

The magistrate told Connell that he would have to get the correct name for “Browning”.

The prosecutor, Crown Counsel Maria Jackson-Richards did not object to Connell’s application for the summonses.

He must also mount a defence to the charge that between Jan. 31 and June 17, 2021, at Georgetown, being employed in the government service as a member of the Royal SVG Police Force and being charged with the performance of duties by virtue of his employment, corruptly received property for himself on account of an action done by you in discharge of the duties of his office.

On May 16, the court heard the evidence of the investigator, Assistant Superintendent of Police Oswin Elgin Richards, who is head of the Major Crimes Unit (MCU).

Richards tendered in evidence an interview that he and detective Corporal Alex Primus of MCU conducted with Latham on June 18.

In the interview, Latham told the two investigators that he went into the armoury twice and stole ammunition in 2021.

He said that he had found a round of Glock ammunition in the station orderly’s desk and gave it to Avi King, of Diamonds, who told him she sold it for EC$20.

King is serving prison time, having pleaded guilty to charges related to the theft of firearms and ammunition from the police station.

Latham said that he was working as the station orderly one night and discovered that the armoury was open.

On another occasion, King told him that the man from Sion Hill wanted some more ammunition.

Latham said that one night between late February and early March 2021, he used a knife and pushed it under the strip around the armoury door and opened it.

He stole three boxes of ammunition and gave them to King, who gave him BDS$200.

In the electronic interview, Latham told the investigator that he was giving them the information because he wanted to secure his job.

He said he never removed any forearm from the armoury, adding that when he removed the ammunition, there were firearms there, but he did not remove any.

During cross examination, Richards admitted to the court that in the electronic interview he did not tell Latham that he has a right to an independent counsel.

Richards said the electronic interview was conducted one day after Latham had narrated to him and Primus what he knew of the incident.

The investigator took notes, which were accepted into evidence, after a trial within the trial, during which Connell challenged the admissibility of the statement and the electronic interview.

Richards said that in the electronic interview, Latham gave “a clearer version in which he is staying this is the truth”.

The investigator further said that he did not count in Latham’s presence the 305 rounds of ammunition about which he had questioned him in the interview.

“I asked him to sign,” Richards told the court.

Connell pointed out that there was one part of the interview that Latham wanted to talk but was not given a chance.

Richards said not giving Latham the chance to speak was not the right thing to do.

“From the interview, this man never went into this armoury?” Connell told Richards.

“The defendant said he went into the armoury twice,” Richards responded.

“And the two times he went in, he never moved any firearm,” Connell said.

The investigator was also asked about the fact that at the beginning of the interview he told Latham that he could call him“sir”.

“Yes. I did. At that point, he is an officer of the law, so at that point we have to maintain respect,” Richards told the court.

Latham was fired around the same time that he was charged with the offence.

During cross examination, Richards also verified that at some point, the armoury was in ASP Francois’ office

“That was before the eruption of La Soufriere. It used to be in that office. It was moved sometime after that period to where it was broken into. In Francois’s office there is a small room they used to have as the armoury,” Richard said.

Connell asked Richards what was the count of ammunition at the station in late February 2021, when Latham said he stole a box of ammunition.

“The procedure as existed there is not really what it really was supposed to be,” Richards said.

He said it seems that in handing over duties, senior officers were not following the procedure.

“Ammunition only have gone missing by way of the defendant,” he told the court.

Richards said that ASP Francois’ firearm was never reported to him as missing.