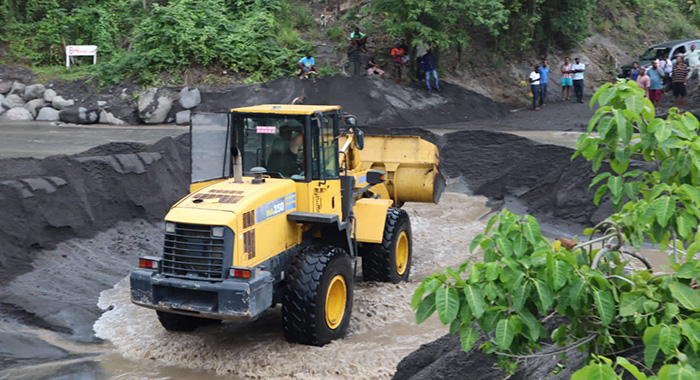 A tractor removes debris deposited by a lahar in northeastern St. Vincent in April.

BALI, Indonesia (CMC) — The director of the National Emergency Management Organisation (NEMO) in St. Vincent and the Grenadines, Michelle Forbes,  says the agency is preparing for another post-volcanic eruption hurricane season.

Speaking on the sidelines of the  Global Platform for Disaster Risk Resilience, which ended here on Friday, she said that since the eruption of La Soufriere in April 2021, residents of northeastern St. Vincent have had to contend with the additional challenge of mudflows, as result of the heavy deposits of ash in the mountains.

The Atlantic Hurricane Season officially begins on June 1, and Forbes warned that the challenges of accessing the northeast of St. Vincent during periods of heavy rains could continue.

“I think at one point it’s probably going to be not about the hurricane season only. It’s about all seasons and all hazards could actually come together and we have to be prepared for this onslaught of the constant hazards that are going to be impacting us and hence why we have to really build on resilience, look at the risk and start looking at how do we reduce the risk and, of course, strengthen our resilience.”

Forbes told CMC that after La Soufriere erupted the first lahars — a mixture of water and rock fragments that flows down the slopes of a volcano and typically enters a river valley — came here weeks after the eruption.

“… we saw our first lahars really on the 29th of April last year after the volcanic eruption and then we had a heavy rainfall event,” Forbes said, adding that NEMO has noted that since then, mudflows occur almost every time there is a rainfall event.

“Let’s not fool ourselves, it’s going to continue,” she said, adding that NEMO, in consultation with the Meteorological Services, has concluded that whereas in the past, it required an inch of rain falling in 45 minutes of constant rainfall to cause rivers to overflow their banks, it it now takes 20 millimetres of rain.

“So we work very closely with the Met Services and we have been looking at the triggers, what has been the threshold that now triggers a flood event or an event in the northeastern part of the country.

“We see now when we have heavy rainfall that from Overland northwards, those areas actually are blocked and you can’t have access to those areas.”

Forbes said there is a lot of ash still on the slopes of  volcano and the mountains on the island, resulting in a lot of volcanic ash and other debris, including boulders, being washed downstream.

“So once we have heavy rainfall, they are going to come down,” Forbes said, adding that the government has announced its intentions to build bridges across some streams in the northern St. Vincent.

Forbes said this is important, noting that the area is home to thousands of people.

She said that the challenges that the hurricane season presents is compounded by the socioeconomic situation created by the Coronavirus pandemic over the last two years.

“… many persons have lost their jobs, the income flow is not there. And how do you prepare in this kind of environment where you’re already fragile, vulnerable socially, economically, and then you have the physical vulnerabilities to deal with.

“So  it’s complex, it’s complex, and I think we have to tackle them one by one and see how as individuals and as a country we can actually reduce that risk,” Forbes told CMC.