Overland, Noel bridges to be built by September — PM 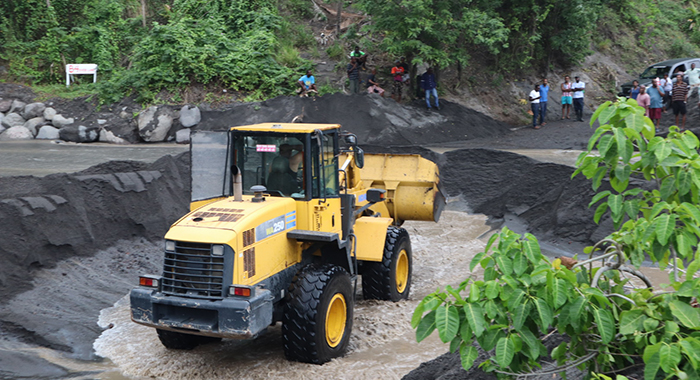 A tractor removes debris from Overland River after a recent downpour.

The government will build Bailey bridges across the rivers in Noel and Overland by September, Prime Minister Ralph Gonsalves said on Wednesday, as he commented on the official start of the Atlantic Hurricane Season.

Gonsalves noted that the rivers “have been causing difficulty in recent time”.

Over the past few years, the two “dry rivers” have been creating problems for pedestrians and motorists during periods of moderate downpours.

The situation has become worse since the April 2021 eruption of La Soufriere volcano.

Gonsalves said Bailey bridges will be constructed initially, as they are easier to install than concrete bridges.

“You don’t worry about the Bailey bridges because there was one down at Cumberland for over 40 years until the storm in 2013 banged up the abutments and weakened the bridge,” he said, referring to the damage to the bridge during the 2013 Christmas Floods.

He noted that the government used US$5 million from Mexico to build a new bridge across that river.

“… hopefully some time in the month of September they should be installed,” he said of the two river crossings in North Windward.

“We have one here from our own stock and we are getting one from St Lucia. But we are also getting six others, hopefully November-December,” he said, adding that there are supply chain challenges.

“Those others have been ordered but we have one on the ground and we are getting a 30-metre one out of St. Lucia. The shorter one would go at Noel and the longer one at Overland.

“And the engineer who was involved, a good professional woman, they have already identified where they’ll put the abutments and the extent of the decline and all the rest of — all the technical things,” the prime minister said.

2 replies on “Overland, Noel bridges to be built by September — PM”