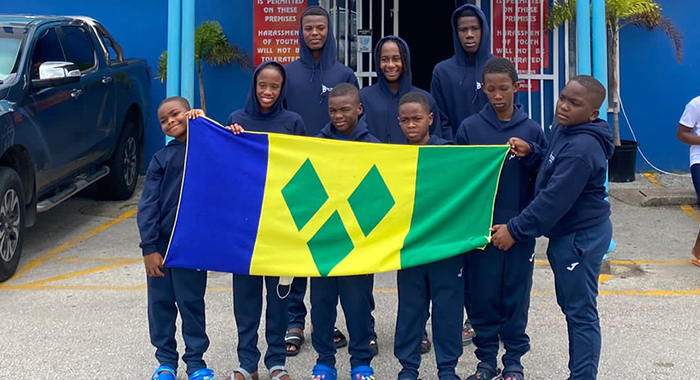 A nine-member team represented the Blue Swim Club at the 30th Aquatic Centre International Swim Meet held in Barbados from May 27 to 30.

Members of the team competed in 12 events at their first long course meet.

All the swimmers had splendid performances in that they were all able to attain personal best times, the club said in a press release.

Jadon Hamilton competing in the boys’ 9-10 category was the team’s most outstanding swimmer. He won a 7 medals — gold in the 50m fly, 5 silvers in the 200m IM and freestyle, 100m freestyle, 50m breast, 50m freestyle, and a bronze in 50m backstroke.

He also placed 2nd in the boys’ 9-10 category overall and replaced a record in the 50m backstroke that was set by Eltonte Leonard of the Black Sands Swim Squad at the Titans Aquactic International Swimming Championship in 2017.

Caghry Williams, swimming in the boys’ 9-10 category, also had an impressive performance.

Belle Adams, who swam in the girls’ 9-10 category, medaled as well in this event winning silver in the 200m freestyle.

An elated coach Tamarah St. Hilaire who was responsible for preparing the athletes for the meet congratulated the swimmers on completing their first long course competition.

“Although it was a bit challenging they represented the swim club well, making personal best times. I am extremely proud of their performance and effort. I would like to thank our sponsor, Mustique Airways who made it possible for the club to participate in the BASA long course Invitational championship. Coaches Jozel Williams, Alyssa Davis and Rickydene Alexander who were also instrumental in ensuring the readiness of the team for the meet were pleases with the team’s performance. They are encouraging the swimmers to continue to give of their best.”

One reply on “Blue Marlins continue to make waves”