Where are we being taken? 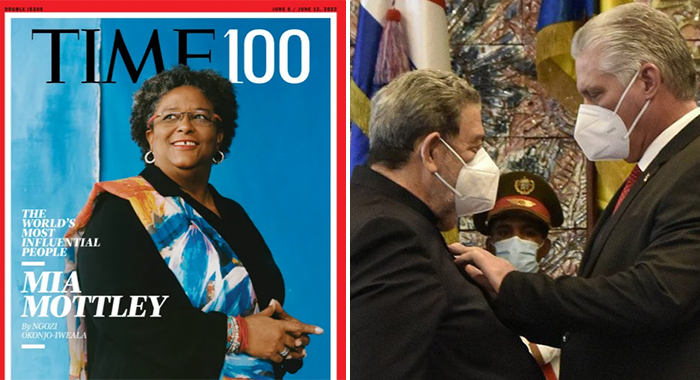 In the past few weeks, the Caribbean witnessed what could be a seismic shift in its continued evolution from a colonial outpost to a playground for the rich and famous to a seat at the table of world affairs.

On one end, Mia Mottley, prime minister of Barbados, was featured on the cover of TIME magazine as one of the 100 most influential people in the world. In the TIME article, she was described as “Bold, fearless, and possessing a great intellect and wit,” and “a brilliant politician who knows how to shake things up.”

The fact that she was included says a lot, and that she was on the cover says even more. Consider that Ketanji Brown Jackson, the first woman of African descent to sit on the US Supreme Court, was included in the list of the most influential people on the planet but was overlooked when it came to making the cover.

On the other end of the spectrum Prime Minister of St. Vincent and the Grenadines, Ralph Gonsalves, received the Order of Jose Marti, the highest award conferred by the Republic of Cuba. This award goes to those who are deemed to be defenders of human rights, proponents of human flourishing, and contributors to education, governance, and culture.

Several international luminaries such as Xi Jinping, the Chinese leader, Vladimir Putin who currently leads Russia, and Nicholas Maduro, President of Venezuela have received this award. The great Nelson Mandela, when accepting this award, said, “We admire the sacrifices of the Cuban people in maintaining their independence and sovereignty in the face of a vicious, imperialist-orchestrated campaign, … We, too, want to control our own destiny.”

Caribbean statesmen Michael Manley of Jamaica and Owen Arthur of Barbados have also been recipients of this recognition. A month before St Vincent’s political leader accepted his award, the Prime Minister of the Commonwealth of Dominica, Roosevelt Skerrit, was similarly decorated by the Cuban government.

It does engender some level of admiration to see Caribbean leaders being recognised for their ideas and leadership. If nothing, these expressions of public acknowledgment of Caribbean brewed leadership provide some measure of inspiration and aspiration for future generations.

But what does all of this mean?

Is there something beyond inspiration and ambition to appreciate?

Our leaders are taking us somewhere. That much is sure. Their influence is directing others to a particular destination. Whether through policies, association, or controlling of the narrative, we, as a people, are on a journey.

Here is the question, where are we being taken?

Do we even care?

Should we seek to find out before we blindly follow this path into the future?

Do we have a say in where we are taken? And if we don’t should we have a voice?

Is it a good place? Where prosperity, justice, and goodness prevail. Or is it a horrible reality where some disproportionately have most of the resources, while others suffer want, oppression, and marginalisation?

This much is clear, we are being taken somewhere, whether we know it or not. That alone should give us pause and after serious, considered thought, a motivation to act accordingly.

One reply on “Where are we being taken?”