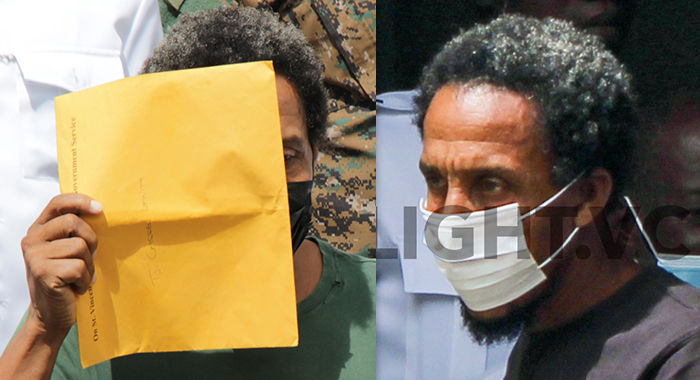 In this composite image, at right, Cassell Lavia uses an envelope to hide his face as he is escorted to prison on Friday, June 3, 2022. He is seen at right in a May 6, 2022 Searchlight.vc photo, after he was convicted of the sex charges.

Justice Brian Cottle handed down the sentence on Cassell Lavia today (Friday) at High Court No. 1, in Kingstown.

On May 6, a jury returned unanimous guilty verdicts on one count of unlawful sexual intercourse and two counts of indecent assault of the child.

The judge imposed sentences of two years and four months on each count of the indecent assault charges, but ordered that they run concurrent to the longer sentence.

The facts of the case, as presented by Justice Cottle, are that on March 7, 2018, the child was on her way to the bathroom at her house.

Lavia, who the girl’s parents trusted, grabbed her from behind while wearing only his boxer shorts and pressed the lower part of his body against her and started to gyrate.

Lavia stopped when another child knocked at the door.

The following day, the girl’s mother went to seek medical attention and Lavia went into the child’s bedroom when she was taking off her school uniform.

He put her to lie on a bed and removed her underwear and inserted his penis in her vagina.

He stopped when another child came into the room.

Later that same night, Lavia kissed the girl on her lips and sucked her breasts, Justice Cottle said.

The girl pretended to be asleep and rolled onto her side but felt something rigid pressed against her buttocks.

The next morning, Lavia told the girl not to report the matter to her mother.

However, later that day, the girl reported the assault to her father, who reported it to her mother.

The child also told her class teacher what had happened. The teacher called he incident to the attention of the principal, who reported it to the police.

The police conducted an electronic interview with Lavia, who told them that he did not penetrate the child but had rubbed his penis on her upper thighs, near her genitalia.

He told investigators that he knew he was unwell and did not wish to infect the child with his illness.

A doctor examined the child and reported no evidence of internal trauma to her vagina, but noticed that her hymen was missing.

The doctor said this was as a result of a poking or prodding of the vaginal orifice, possibly by an erect penis.

In mitigation, Lavia, who did not have a lawyer, told the court that he was sorry and apologised for his actions.

“I do not know what you gonna sentence me or how many years you are gonna give me imprisonment,” he said.

In handing down the sentence, Justice Cottle noted the aims of sentencing, namely retribution, deterrence, prevention and rehabilitation.

He noted that Lavia did not benefit from a secondary education, having completed his schooling at senior 2.

He worked as a landscaper and gardener on a Grenadine island.

Justice Cottle noted that unlawful sexual intercourse with a girl under the age of 13 carries a maximum penalty of life imprisonment.

Citing the sentencing guidelines, the judge pointed out that the girl was 9 years old at the time, adding that this made the crime a category one, or exceptional, offence.

He said the crime was Level A — the highest — in terms of its consequences, adding that the child’s parents had trusted Lavia to treat her as if she were his own.

Justice Cottle noted that Lavia was 42 at the time and took steps to prevent the girl from reporting the crime.

He said that the sentencing gird showed that the starting point should be between 50% and 80%  of the maximum sentences — life in prison, a notional sentence of 30 years.

The judge began with a starting point of 66% of the maximum sentence, or 20 years.

The fact that offence took place in the child’s home, where she should have been most secure, and in the presence of another young female child, were aggravating features of the offence.

Mitigating was that the only violence involved was that inherent in the commission of the offence.

Regarding the offender, Justice Cottle noted that Lavia is infected “with a serious sexually transmitted disease” and referred to this in his interview with investigators.

The judge said that the victim impact report said that Lavia knew that he was HIV positive at the time of his crimes.

Mitigating was the fact that Lavia had no previous convictions.

After considering the aggravating and mitigating features, the judge increased the notional sentence by three years.

He noted that there was no dedction for a guilty plea but subtracted the two months that Lavia had spent on remand, leaving him to serve a further

Regarding the two counts of indecent assault, Justice Cottle noted that the maximum sentence is five years in prison.

He said that as regards the consequence of offence, the complainant was less than 10 years old, making it a category 1 offence.

Regarding the seriousness, Lavia abused the trust reposed in him and there was a significant disparity between his age and that of the girl, placing the offence at level 1 or high.

He said there was minimal skin-to-skin contact with the genitals of the complainant.

The court established a starting sentence of 50% of  the maximum, or two years and six months in prison.

The judge did not examine the aggravating or mitigating features of the indecent assault, as the court was minded to avoid double counting

Justice Cottle said he wrestled with the question of consecutive or concurrent sentences but had concluded that since the offences took place over two days, they were a single, protracted act.