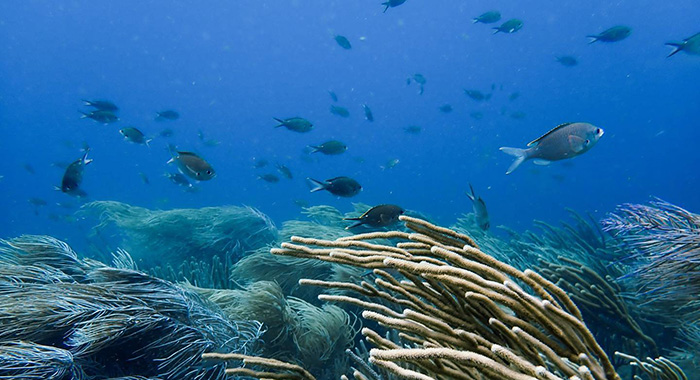 In recognition of World Oceans Day, June 8, the St. Vincent and the Grenadines Environment Fund (SVGEF) invited the public  to view some of the sea life at Cavali Reef, Richmond, as captured by photographers Nadia Huggins and Stephan Hornsey.

Cavali Rock is located near to where a rock pier has been constructed in Richmond as part of the stone-mining quarry that the government has authorised to operate there for 30 years.

In a Facebook post, Louise Mitchell of SVGEF said that coral reefs, sometimes called the rainforests of the sea, are but a small fraction of the world’s ocean area, (less than 1%).

“They, however, provide home for at least 25% of all marine species thereby confirming their critical importance to the ecosystem.”

Mitchell cited World Resources Institute as saying that two thirds of coral reefs in the Caribbean are threatened by human activity, including coastal development, disease and rising sea temperatures, sediment and pollution from inland sources, marine based damage (discharge of wastewater, etc.), overfishing and ineffective management of marine resources.

“Since researchers began intensively studying these reefs in the 1970s, about one half of Caribbean corals have died. The iconic elkhorn and staghorn corals that once dominated Caribbean reefs have been hardest hit, with only 20% of their populations remaining today,” the post said.

“The SVGEF, together with photographers Nadia Huggins and Stephan Hornsey, in recognition of World Ocean day, chose Cavali Reef, for a ‘picture dive’.

The reef is situated at Cavali Rock, just off the southern point of Richmond beach.

Cavali Reef is a fringing reef, which spans about 30′ off of shore, beginning in waters about 10′ deep, until, just directly in front of Cavali Rock, it drops off into a 80′ wall.

“Quarrying may pose a potential threat of reef degradation, due to the large level of sediment that may potentially drain into the sea.

The images we captured on the dive and share with you here, reflect the healthy state of the reef.”

Mitchell said that the reef was thriving with “the healthy and dense set of soft coral and teeming with a large variety of small fishes. When we free dived down 80 feet and brought up sand, it was mixed with ash and had a potent smell of sulphur (the impact of last year’s Soufriere eruption), amazingly preserved by the sea water.

“Look closely at the seabed photos and you might see glimpses of the ash settlement. We are happy to share this special experience with you @svgef @nadiahuggins @stephan.hornsey”