Man who locked son, 4, in house alone fined; advised ask to ‘ease up’ on drinking 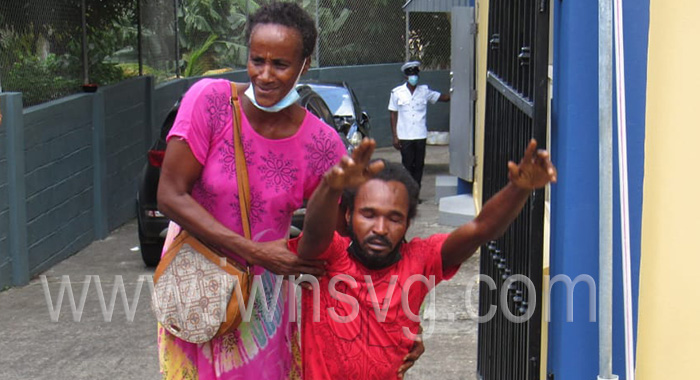 Casmore Hepburn, right, reacts outside the Serious Offences Court, on Monday, June 13, 2022 after being fined for leaving his son at home on June 5, 2022. Hepburn’s girlfriend is at left.

The man who pleaded guilty last week to a charge relating to leaving his 4-year-old son alone at home has been spared immediate jail time.

Instead, Chief Magistrate Rechanne Browne fined the man, Casmore Hepburn, 39, of Lower Questelles, EC$1,500 to be paid by Sept. 1, if he is to avoid six months in prison.

After  the sentencing, Browne told Hepburn to get himself in order as he has cared for the child since he was 18 months old.

She urged him not to allow the situation to repeat itself.

The magistrate said the child was not injured and advised the defendant “to ease up on his drinking”.

She said the report from Social Services was very reassuring and the defendant “should use his relatives to do all they can to ensure the success of the child and to ensure that he is safe”.

Outside the courtroom, Hepburn knelt on his knees, his girlfriend beside him, giving thanks.

Hepburn spent the weekend in prison, having been remanded in custody since Thursday, when he pleaded guilty to a charge that on June 5, at Lower Questelles, being charged with the duty of providing the necessities of life for the child, he, without lawful excuse, failed to do so.

Prosecutor Station Sergeant of Police Renrick Cato had asked that Hepburn, who was unrepresented at his arraignment, be given a “sharp, short shock” of a prison sentence to sober up.

The chief magistrate, however, said that before handing down her sentence, she wanted to hear from Child Protection Service about the status of the child, who had been placed in state custody since the incident.

On Monday, Hepburn appeared in court with Duane Daniel as his lawyer.

Child Protection Services told the court that they visited Hepburn in prison on Friday to ascertain the whereabouts of the mother of the child.

At the initial hearing, Hepburn told the court that he had taken custody of the child after the mother put him up for adoption.

On Monday, the court heard that the mother, who is unemployed, now wanted custody of the child as her boyfriend works in construction.

The social worker said the child is very articulate and well cared for but “did say he’s often left alone”.

She said the child, who turned 4 in February, is “fine” and “adjusted well” to the home where he was placed.

The home is managed by a charity with assistance from the government.

On June 5, about 9 p.m., someone telephoned the Questelles Police Station, reporting that Hepburn had left the child at home alone and went to the South Leeward Carnival street jump-up.

Detective Corporal 45 Forde and other officers visited the home and met the child asleep alone in the dark.

They took the child into custody and contacted Child Protection Service, who placed him in the home.

Hepburn visited the police station later that night but was so intoxicated that the police officer had to assist him in standing.

He told officers that he had gone to the shop and when he came back, someone told him that police had taken the child into custody.

On Monday, Daniel told the court that prior to the incident, Hepburn demonstrated a particular behaviour in that he always had the child with him.

He said Hepburn’s home, in the downstairs of a dwelling house, has no electricity connection, and the child was already asleep.

The lawyer said Hepburn’s mother and sister had retired for the night in the upstairs of the building, which is only accessible by an external staircase.

Daniel told the court that as a result, the defendant asked his neighbour, Kenisha Shepherd to keep an eye on the child as he was going down the road for a short while.

The lawyer argued that between the telephone call at 9 p.m. and the time the defendant arrived at the station at 9:55 p.m. was a short period.

He said the defendant has no previous conviction and works in construction and wants to be with his son.

Hepburn’s sister was outside the court, Daniel told the court.

“Where were they all the time? Why weren’t they exhibiting this type of concern all the time? “I don’t like it all!” the chief magistrate said.

Daniel asked the court to reprimand or fine the defendant.

However, Cato told the court, it was the first time the court was hearing about a neighbour having been asked to keep an eye on the child.

“Why would a concerned father leave a child at night, without light, to go and buy cigarettes?” the prosecutor said.

He said the offence carries a maximum sentence of five years imprisonment and a deterrent must be sent to others to reflect the seriousness of the offence.

But Daniel told the court that five years is for extreme neglect, adding that the defendant wasn’t out for more than an hour.

He said there was no evidence that the defendant went to buy cigarettes, and urged the court to reject this as hearsay.

Daniel said that whatever condition Hepburn was in, he was sober enough to go to the police station for his son.

Credence should be given, Daniel said, as Hepburn is a single father trying to raise his son, adding that the father was trying but fell short.

After a one-hour recess during which the court considered her sentence, Browne said she  considered the seriousness and consequences of the actions taken by the defendant.

“We must be cognisant as caregivers and parents. We are to ensure their best interest at all times,” she said, adding that the court also considered the report of Child Protection Services.

Browne said Hepburn was not the best father nor was he the worst.

She said aggravating is that there was a young child who was fearful and frightened when the police visited the home and he was left unattended and in the dark.

Mitigating on Hepburn’s behalf  was his extreme remorse and the fact that he had no previous convictions.

Hepburn’s son was returned to his custody after Monday’s court hearing.

7 replies on “Man who locked son, 4, in house alone fined; advised ask to ‘ease up’ on drinking ”