CDB to focus on food and nutrition, energy, water security 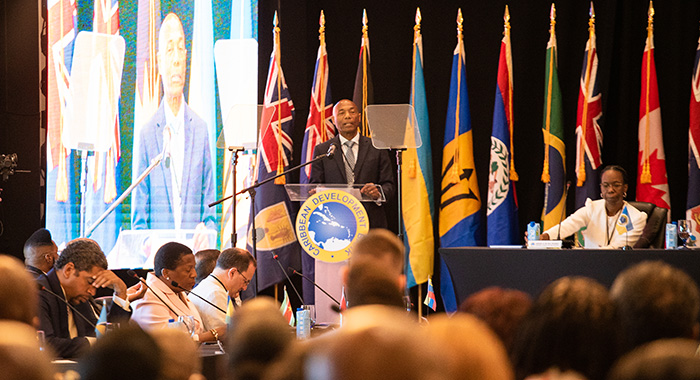 CDB President Hyginus “Gene” Leon addressing the opening of the 52nd annual meeting of the board of directors, on Wednesday.

PROVIDENCIALES, Turks and Caicos Islands (CMC) — The board of governors of the Barbados-based Caribbean Development Bank (CDB) began its 52nd annual meeting here on Wednesday with an indication that the region’s premier financial institution intends to advance food and nutrition security, energy and water security as its “big initiatives for 2022” and beyond.

CDB President, Hyginus “Gene” Leon said that as region looked forward towards to the future,  no one could have anticipated the continuation of the coronavirus (COVID-19) pandemic or the protracted nature of Ukraine-Russia conflict.

“We are also yet to see the full ramifications of this conflict for our region,” he told the opening ceremony, while noting that this prolonged uncertainty necessitates that the region proceeds with even more haste to create the sustainable future that it envisages for the Caribbean.

“And as such, we need to focus our attention on what this future should look like and how we could best create it,” Leon said.

He said that for decades the Caribbean has been over-reliant on food imports with the World Bank estimating that between 80 to 90% of all food consumed in the region coming from abroad, and only three Caribbean countries — Guyana, Belize and Haiti — producing more than 50% of their own food.

Leon said that the COVID-19 pandemic has exacerbated existing inequalities across the board, including in employment, housing, healthcare and food security.

“It is estimated that there are now 2.7 million ‘food-insecure’ people in the English-speaking Caribbean, and according to the third round of the Caribbean Community (CARICOM) COVID-19 Food Security and Livelihoods Impact Survey, ’71% of respondents observe higher than usual food prices’,” Leon said.

He said a breakdown of responses by gender was not presented by that survey, but historically, in the Caribbean, women are disproportionately affected by food and nutrition security.

“As a region, we must focus on building a modern, competitive, inclusive, and resilient agricultural sector in which food and nutrition security have primacy of place and the potential for wealth creation an attraction to young agripreneurs,” Leon said.

The St. Lucian-born economist said that at the recent Agri-Investment and Food Forum in Guyana, CARICOM leaders expressed grave concern about food shortages, the high prices of imported food, fertilisers and other agricultural inputs, and the limited options for transportation of agricultural products within the region.

“They have stressed the need for urgent action to take forward the vision for agricultural development championed by President Irfaan Ali of Guyana that targets a reduction in the food import bill by 25% by 2025  — that is, the ’25 by 2025 agenda’”.

The CDB president said efforts to reduce the food import bill must be underpinned by investments in climate-smart and resilient agricultural technologies, research and development, and knowledge systems that connect farmers, industry, and research to sustain the long-term development of the sector.

“It must also include new opportunities for women-owned agribusinesses, as in many of our borrowing member countries, women provide the link between the farm and the traditional marketplace, yet remain at the bottom of the value chain.”

The CDB has commenced discussions with partners on mobilising flexible and innovative financing to support this initiative.

“We also believe that our appraisal of the establishment of a CDB-led regional hub for the International Trade Centre Global Initiative – SheTrades, we will be able to integrate more women in regional and global agri-trade, supporting increased value-added for women owned agri-enterprises.”

On the issue of energy, Leon said this is an essential input to all economic activity and has critical ramifications in the social and environmental context.

“Our high dependence on imported fossil fuels and the associated high cost of electricity has been stifling the pace of growth and development in the region, including poverty reduction efforts, and is a continued threat to the attainment of the sustainable development goals.

“As such, there is a dire and urgent need to accelerate the transition to increase renewable energy generation, utilising our abundant solar, wind, hydro, and geothermal resources. While doing so, we need to ensure that this transition is managed to minimise the potential negative effects of disruption, and to ensure it is ‘just’.”

Leon said this is particularly important for some CDB borrowing member countries, such as Guyana, Suriname, and Trinidad and Tobago, whose economies are largely reliant on fossil-fuels.

He said the Caribbean is fortunate, in that it is not starting from “scratch”, as over the last decade, the region has been pursuing a shift sustainable energy, through the increased use of renewable energy sources and improvements in energy efficiency.

He said the target agreed by energy ministers is for a 47% contribution from renewable energy by 2027, which translates into a 55% contribution by 2030.

“However, progress towards this target has been slow,” Leon said, adding that annually, the region’s renewable energy penetration rate will need to increase by 13-fold if the target is to be achieved.

“The current estimate of the cost of this transition is over US$20 billion,” Leon said, adding that the CDB is are updating its Energy Sector Policy and Strategy and has proposed to embed within it a framework, called the Accelerated Sustainable Energy and Resilience Transition 2030 — or ASERT-2030 Framework — intended to enhance CDB’s support to borrowing members countries as they urgently ramp up their energy sector transitions.

The CDB president said that water security, already being threatened by the impact of climate change, is especially critical to the region’s development, especially in key sectors such as health, agriculture and tourism.

He said that since 2018, the CDB has supported, with partners, the development, refinement and promotion of the Regional Strategic Action Plan for Climate Resilience in the Water Sector in the Caribbean (RSAP).

“We are currently revising our Water Policy, Strategy and Operational Guidelines, with the support of Agence Française de Développement (AFD) with a completion date of December 2022.”

At the country level, CDB is supporting approximately US$131 million in projects in Barbados, The Bahamas, Belize, Dominica, Grenada, Jamaica, St. Lucia, Nevis, and Suriname “which are delivering infrastructure, institutional strengthening and capacity building to enhance water security through works, systems, and people.

“We are also collaborating with Inter-American Development Bank and Caribbean Catastrophe Risk Insurance Facility on the formation of a Caribbean Water Utility Insurance Company (CWUIC), with an initial product launch planned for 2022.

“Going forward, our target is to reduce non-revenue Water from an average of 60% to 30% by 2030 and to significantly strengthen data collection, sharing, and analysis to support integrated water resources management (IWRM),” Leon said.

He said the development needs of the region and the attainment of the Sustainable Development Goals require significant collective effort and financial resources.

“Building on this year’s theme of Measure Better to Target Better, I propose for next year to hone in on the theme of Access to Adequate and Affordable Financing (#AAAF). This access will shape a future where our citizens live quality lives in societies that have embraced digitalisation, and possess robust private sector partnership with the requisite governance arrangements to safeguard food and energy security,”

Putting this in context, Leon said initial estimates suggest that providing financing for projects on the scale envisaged in building resilience, encouraging transformation, and achieving sustainable development, would require upwards of US$100 billion over the next decade.

Leon said that the CDB estimates that across its borrowing members countries during 2023-2030, “we estimate that sustainable energy will require at least US$40 billion, water and sanitation US$22 billion, transportation US$11.5 billion, agriculture and food security US413 billion, and digital transformation another US$12 billion.

“The CDB also estimates that to halve poverty by 2030, borrowing members countries would require an investment of approximately US$10 billion annually, which far exceeds current investment levels in the region. Cognisant of the current capacity of CDB, I posit that meeting this target will be a function of creating partnerships to facilitate access to adequate and affordable financing for development,” Leon said.

“We know that our regional governments have been playing a significant role in driving development at the national and regional levels but recognise, at the same time, that they cannot do it alone especially given current high debt levels and the limited fiscal space.”

Leon said the private sector will need to play an equally important role in delivering development outcomes and in financing sustainable transformation and development in the region.

“Hence the clarion call to create a partnership for development between the public and private sectors, where national anchor goals like food and nutrition security, energy security, and water security drive individual and joint efforts at achieving milestones to the ultimate anchors. This has to be underpinned by national dialogue and the fostering of an absence of policy uncertainty,” Leon added.