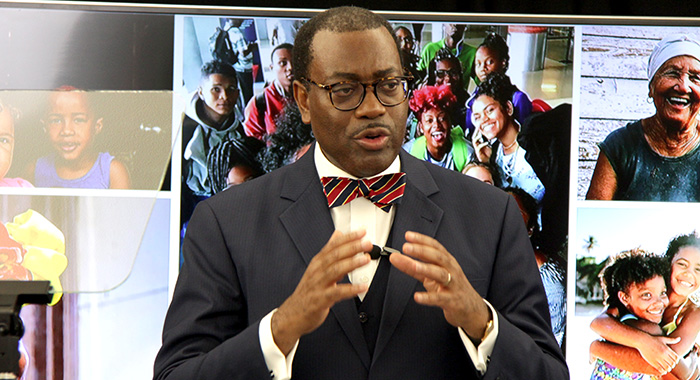 PROVIDENCIALES, Turks and Caicos Islands (CMC) — President of the African Development Bank (ADB), Akinwumi A. Adesina says there is a “great opportunity’ to deepen the development ties between Africa and the Caribbean as he shared his thoughts on a number of developmental issues affecting the regions.

“The hopes and aspirations of the peoples of the Caribbean are the same as those of the peoples of Africa,” Adesina said Tuesday night, as he delivered the 22nd William G. Demas Memorial Lecture that forms part of the 52nd annual meetings of the Barbados-based Caribbean Development Bank (CDB) being held here.

“Our history is linked by a common heritage. Separated we are by distance, but close are we in lineage, desire, hope and aspiration,” Adesina said as he spoke on a number of issues affecting both regions, including the coronavirus (COVID-19) pandemic, food insecurity, the Russian invasion of Ukraine, as well as debt and resource mobilisation, and inclusive growth for youth and women.

He told the audience he sees “a great opportunity to deepen development ties between Africa and the Caribbean, through a new strategic partnership” between ADB and CDB.

Speaking on the topic “Development in a Context of Global Challenges: Experiences and Lessons from the African Development Bank”, Adesina said that over the past decade, six of the 10 fastest-growing economies in the world were in Africa.

He said the end result was a downward global economic spiral, with Africa alone witnessing a decline in real gross domestic product (GDP) growth by minus 1.6%, the lowest growth in more than 20 years.

“Over 29 million people fell into extreme poverty and over 30 million jobs were lost. As economic growth and revenues declined for governments, the increased expenditure on health led to rapid growth in fiscal deficits.”

However, growth in Africa recovered to 6.9% in 2021, Adesina said, adding, “I am delighted to note that according to the Caribbean Development Bank, GDP growth in the Caribbean region is estimated to recover to 9.1% in 2022.”

The ADB president said that among the lessons learnt from COVID-19 is the importance of global cooperation and solidarity in solving problems.

“It is great credit to the global scientific community that it took just 327 days to rapidly sequence SARS-COV-2 and develop the vaccines,” Adesina said, adding that the over concentration of supplies or manufacturing of anything is bad for the global economy as it creates and perpetuates inequities.

“There is clear divergence between rich and poorer countries in access to vaccines and therefore the speed of recovery of normal economic activities, including removing travel restrictions and normalisation of economic activities.”

Adesina said vaccine nationalism has taught the Caribbean and Africa that sovereignty is important.

Adesina said the ability of developing countries to manufacture their own vaccines continues to face serious challenges, “as developed economies block the waiver of intellectual property rights that will make it easier to manufacture vaccines, tests and treatments, as well as speed up technology transfer”.

He said that as both regions handle the health pandemic, they must also confront the  global challenge of climate change.

“Climate change poses the greatest threat to the growth and development of developing countries. You feel the effects right here in the Caribbean, where extreme weather patterns from floods, cyclones, hurricanes and droughts, have destroyed lives and decimated economies.”

“We could see that from the period between 1970-2016, especially, when Caribbean countries suffered losses totalling over $22 billion from climate-related disasters.”

Adesina said that annual disaster losses in the Caribbean are estimated to be over three billion US dollars and that “these small island states are especially highly vulnerable.

“Not only are lives lost, livelihoods are destroyed, while expensive infrastructure is destroyed, worsening economic growth and competitiveness of countries.”

In the case of Africa, he said the continent is the least contributor to climate change in the world, accounting for only four% of all global greenhouse gas emissions.

“Yet, the continent suffers disproportionately from the negative impacts of climate change, including increased frequency and intensity of droughts, cyclones, floods, compounded by desertification.”

“Africa suffers seven to 15 billion US dollars per year in losses to climate change, which are projected to rise to US$40 billion per year by 2030. Africa has no choice but to adapt to climate change. To support the continent in doing so, the African Development Bank has doubled its financing for climate to US$25 billion by 2025.”

He said the ADB is the leader on climate adaptation in Africa, and globally.

“The share of our climate finance dedicated to adaptation is 67%, the highest among all multilateral development Banks,” Adesina said, adding that both regions need more financing to insure many more low-income countries.

“As we look towards COP 27 in Marrakesh, Egypt, the developed countries must translate promises into action, and climate exhortations into climate monetisation.

“The promised US$110 billion annually from developed countries to developing countries must be met. As the late Kofi Annan, the former United Nations Secretary General, once told me “the only promises that matter are the promises kept”.

Adesina spoke of the impact of the Russia-Ukraine war on food prices in Africa and the response of the ADB.

“We all agreed it is time to support Africa to produce its food. It is time to have food sovereignty. The same must apply to the Caribbean.”

He pointed out that a recent survey by the Caribbean Community (CARICOM) and the World Food Programme showed that food insecurity has increased by 72% among the population of the English-speaking Caribbean countries.

“Across the Caribbean, close to 40% of the population are food insecure, about 2.8 million people,” Adesina said, adding, “there is no dignity in begging for food.

Adesina also detailed ADB’s investment in renewable energy on the continent, adding that whether it is for agriculture, or for industry, no economy can develop without access to electricity.

He said the Caribbean region also has significant potential in renewable energy and  applauded the efforts being made to unlock the potential.