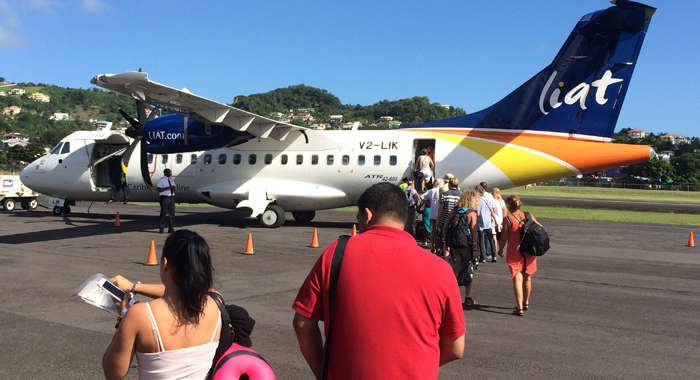 KINGSTOWN, St. Vincent (CMC) –  Prime Minister Ralph Gonsalves says some strong critics of former regional carrier, LIAT, are now wishing for its return as air transportation across the region has gotten worse since the demise of the airline.

“You know, the question of travel leads me to straightaway, now just to say something about LIAT. For nearly 20 years after I came into office on March 28, 2001 until 2020 — 19 years I was there with LIAT as chairman — longest serving chairman continuously, I believe, of the shareholders,” Gonsalves said on a radio programme here as he spoke of the challenges he faces as he prepares for a number of overseas trips including travel through the Caribbean.

The airline is owned by the governments of Antigua and Barbuda, Barbados, Dominica and St Vincent and the Grenadines (SVG). Antigua and Barbuda Prime Minister Gaston Browne said previously that a decision had been taken that would allow Barbados and SVG to turn over their shares in LIAT to St. John’s for EC$1.

Gonsalves said St. Vincent and the Grenadines was once the major shareholder of the Antigua-based airline, until the re-fleeting exercise, which saw shareholder governments borrow US$65 million from the Barbados-based Caribbean Development Bank (CDB).

“I said, well, we have to apply the Aristotelian principle of equity among equals, proportionality among unequals. And since Barbados, and Antigua were benefiting most, they will have to put in more money with the loan from the CDB. That’s when our shares dropped.

“But I was still there, soldiering on. And all the time everybody beating me up. ‘What Ralph putting money in it for?’ You remember all the criticisms?” Gonsalves told radio listeners.

He said that as recently as April 7, 2020, he went to Parliament with the supplementary appropriation bill and budgeted US$1 million in an effort “to give it a final shot.

“But then one of our partners at the time in the regional setup, did not want to put in anymore, at least had gotten fed up. And then some of the pilots and some of the flight attendants and some of the engineers, they believed that the thing would’ve just continued going like it was going. When I required reasonableness, they weren’t reasonable.

“But in Parliament on that April day, the opposition said why am I taking money to put to LIAT, dead horse I flogging; that I must stop this thing and so on and so forth. Remember that?”

Earlier this year, Prime Minister Browne appealed to Caribbean trade unions to re-think their positions regarding the latest offer made to laid-off workers of the airline.

The Antigua and Barbuda government said it was providing two million dollars “to meet partial satisfaction of the cash component of the compassionate pay-out” to former local employees of the regional airline, LIAT.

On Tuesday, former LIAT employees based in Barbados, complaining of being  “disappointed and frustrated” by the way they have been treated over the last two years by Caribbean governments, submitted a petition to Prime Minister Mia Mottley calling for the payment of severance owed to them.

The petition, with over 2, 200 signatures, also urged Mottley to keep to her promise to meet with the former workers and to provide a deadline as to when the severance would be paid.

In May, the Waterfront and Allied Workers Union (WAWU) called on the Dominica government to follow the example set by St. Lucia that has entered into an agreement with non-management employees of the cash-strap regional airline, who were terminated by the closure of the company in 2020.

“First and foremost that is a very powerful statement from the government of St. Lucia, one that I hope the shareholder governments can follow because they are not part of the shareholders, but yet they felt the compassion and the empathy of the workers to initiate that thing,” said WAWU President, Donald Rolle.

“I would really encourage the other shareholder governments … that is one of the initiatives and discussion point that the unions were trying put at the table but for reason it was not getting traction  from the shareholders,” he added.

Gonsalves said he had seen a letter written by the St. Vincent-born international soca artiste, Skinny Fabulous, calling for the resurrection of LIAT.

In an instagram post, the singer said he wanted to “publicly apologise”, to the airline, saying it had provided “a great service that we all took for granted”.

He said that travellers bullied LIAT and perverted the meaning of its acronym to “Leave Island Any Time”, “Luggage in Any Terminal” and “Late In All time.

“We were mean and unappreciative for we knew not what the future held for us,” Skinny said, adding, “you never miss the water till the plane stop fly”.

The singer said that commuters also complained about LIAT’s prices, adding, “but look at the prices now.

“We complained about your schedule, but look at the schedule now. In fact, what schedule. There are days now that we can’t reach certain islands. Please come back and be as late to arrive as you want because I realise not that it wasn’t deliberate, and that you had a lot on your complicated, multi-island, Caribbean-serving plate.”

Gonsalves said he had repeatedly highlighted the importance of LIAT to the region.

He said he had highlighted to regional governments the importance of LIAT to connectivity and tourism in the region.

“Fellas say not one cent they putting in and all kinds of self-appointed experts. But they didn’t worry me you know.

“And then, finally, LIAT went the way of all flesh? But now, they’re seeing the importance of LIAT. Well, you know, I’ve been around long enough and I always tell persons, I am not perfect in my prognosis and analysis, but I get it far right many, many more times than the others,” Gonsalves said.