Arrowroot farmers paid half the value of crop lost to eruption 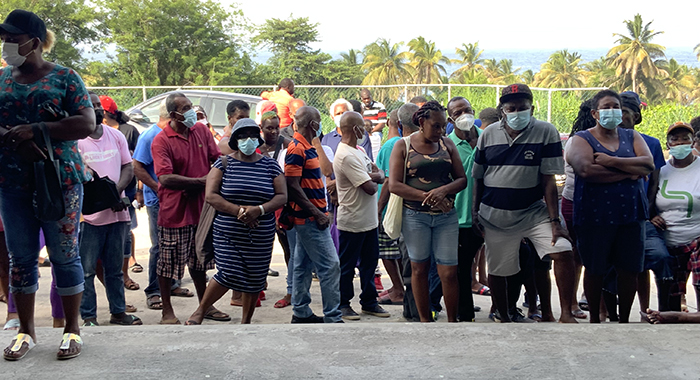 Arrowroot farmers and workers in the sector wait to receive their payments. (API photo)

The government has paid EC$852,850 to 227 arrowroot farmers, representing half of the value of the crops that was not reaped as a result of the April 2021 eruption of La Soufriere, which also destroyed the arrowroot factory.

“So they have actually not been disadvantaged in any significant way, or, indeed, at all. Because those who didn’t reap and it’s in the ground, you get paid half if you had reaped it and delivered it to the factory, they wouldn’t have had the expense of reaping,” Prime Minister Ralph Gonsalves said.

He said that the pay-out is part of the government’s efforts to cushion the impact of COVID-19, the volcanic eruption, Hurricane Elsa, “the convulsions of monopoly capitalism, which impact upon us from its global perch, and as a consequence of the knock-on effects of the global political, geopolitical uncertainties mainly the Russia-Ukraine war”.

Gonsalves said that some of the arrowroot farmers “got quite some tiny sums but it is good to see that these resilient individuals have received some support”.

He said the payment is separate from the $500 monthly support to farmers and fishers.

“And then you have to remember the monies which had been paid out through Western Union by way of the World Food Program of the United Nations, which we raised together,” Gonsalves said.

“And that is now going to be replaced over the next three months for the persons in the [Volcano] Red Zone, the Orange Zone and the Yellow Zone by monies for 4,000 families.”

He said the list was being finalised and Bank of St. Vincent and the Grenadines was printing the cards.

“… and, hopefully, the  beginning of July, we would have distributed these cards top the household heads or the person identified as such in those 4,000 families and we will put the money on a monthly basis in their accounts so that they can use the cards,” Gonsalves said.