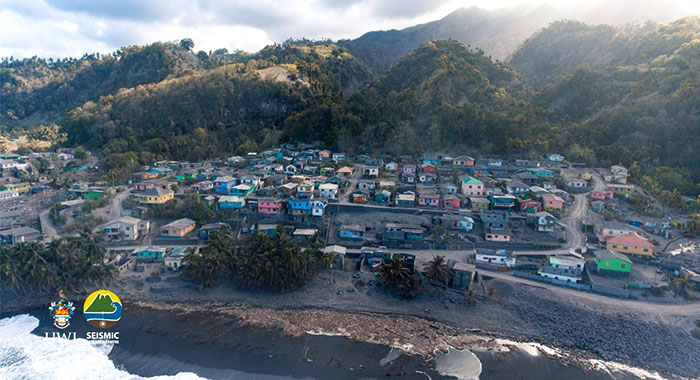 The Red Zone community of Sandy Bay in May 2021, one month after the eruption of La Soufriere. (Photo: Javid Collins/UWItv)

While much of St. Vincent is focused on the first Vincymas since 2019, many residents of the volcano Zed Zone, are still waiting for their homes to be repaired, three weeks into the hurricane season, and more than a year after the eruption ended.

And Leader of the Opposition Godwin Friday said that the government should fix first those homes that are worst affected.

Friday said that people outside of the volcano red zone have readjusted after the eruption faster than those living in the danger area.

“… Senator [Shevern] John has lamented the fact that in so many cases where homes have been damaged in North Windward, in her constituency, where the government has been very slow and some will even tell you — because they have called me about it — has been selective in whose homes have been repaired.”

Friday, speaking Monday on NICE Radio, said this is “something that really needs to be examined, and rectified so that the people who are in the greatest need are attended to first, not those who are the reddest party card”.

The opposition leader said that said a worst hit, first fixed approach needs to be taken to the repairs.

“Because on top of all the stuff we talked about, getting back to normal after COVID, they also have their homes, if it rains, you have to be living in one part of the house because the other side is leaking, and so forth,” he said.

“You can’t put up with that a year after the volcano stopped erupting. These are not things that are going to take huge kinds of outlay of capital for each project or major renovations in each instance.

“Most of the homes are modest accommodations,” he said, adding that some houses need repairs to roofs or walls.

“That is something that should be given priority. So that these people who had to move and go back and they have suffered the most from the volcanic eruption, that this is not dragged out longer than it should be. And this is a situation that needs urgent attention.”

Friday commended John, who was the NDP’s candidate in North Leeward in the 2020 general elections, “for keeping it on the front burner, always talking about it; always representing her constituents.

“And similarly, in North Leeward, [former area representative] Patel Matthews has spoken about the situation there and the problems of persons getting back into some sort of economic activity, the rehabilitation of the lands, the fixing of homes, I saw some of the homes that were damaged as well, those things need to be done.

“And the government said that they got money, I remember in the Parliament, there was some talk of some $300 million to help, for the reconstruction and rehabilitation of homes and properties and businesses and so forth and lands in the red zone particularly.

“So let’s get it done. It’s been a long, long time and people have been extremely patient.”

He said that the opposition has given the government enough room, mindful of the challenges of the COVID-19 pandemic and the impact of Hurricane Elsa last year.

“We understand these circumstances, but time has run out. Patience is now being tried. And it is time now for them to put the effort in, accelerate the process of assisting those persons who have been affected, their homes, their lands, their properties, their businesses, their churches, and to do so based on need, first and foremost.

“The ones who are worst affected … should be first assisted. You don’t go by geography and say we are starting in Sandy Bay and working north.

“Somebody up in Owia living in a house without a roof or having to put tarpaulin in a corner and so forth, you going say wait until you reach there?”

He said such an approach does not make sense, adding that the opposition will continue to speak on the situation.

“… people have gone back to normal, and they’re enjoying carnival, and so forth, and seemingly life is coming back to normal. But those persons who are in those communities that were directly impacted by the eruption of La Soufriere, life has still not returned to normal for them in a most basic way. That is, finding a place to live safely.

“And we have to continue to advocate for them, I promise them that. And I will deliver on that promise to continue to make noise until the government responds. They have been way, way, way too slow in doing so. There’s no excuse now for that more than a year after the volcano stopped erupting. So let’s get on with it,” the opposition leader said.