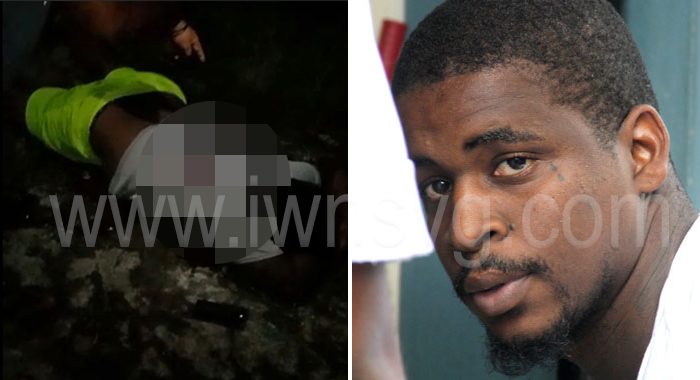 Kishorn Jackson, seen at left in a March 2018 iWitness News photo, was shot and killed in Brighton Monday night.

A Rockies man who was awaiting trial on two counts of attempted murder and one count of conspiracy to commit robbery was shot and killed in Brighton Monday night.

Dead is 30-year-old Kishorn Jackson, also known as “Kishron”, who is originally from Rillan Hill.

iWitness News understands that Jackson, a van driver, was shot multiple times and died on the spot sometime after 9 p.m., in Brighton, where he had gone to drop off the omnibus for the owner after the day’s work.

Jackson’s matters before the court were listed for possible trial during the current session, which ends late July.

iWitness News is not aware of any link between the court matters and Jackson’s death and police are yet to comment on the latest homicide, which brings the tally this year to 22.

Jackson was charged in connection with the March 15, 2018 shooting of two people during an attempted robbery of a Lotto booth in Kingstown.

Jackson had initially appeared in court with a cast on his right leg, which he reportedly broke as he attempted to escape police.

iWitness News understands that he was nabbed at the Milton Cato Memorial Hospital one day after his alleged crime, where a vehicle took him for medical attention.

Jackson allegedly committed the offences just three days after he was released from prison after completing a sentence.

He was charged that on March 15, 2018 at Heritage Square, Kingstown, he attempted to murder Errol Hinson of Enhams and Veron Williams of Kingstown Park.

Jackson was also charged with conspiracy to commit robbery at Heritage Square, also on March 15, 2018.

Hinson, then 69, a security officer, received a gunshot to the left side of his jaw, while Williams, then 43, of Kingstown Park, was shot in the left side of her back when a gunman attempted to rob the Lotto booth at Heritage Square.

Hinson and Williams were rushed to the Milton Cato Memorial hospital and survived their injuries.

Jackson is the second person in St. Vincent and the Grenadines to be killed while awaiting a High Court trial.

On June 18, unknown assailant(s) shot and killed Cassion “Cuz” Stapleton, 33, at a shed near his home in Kingstown Park.

He was killed four days before he was scheduled to appear before the family court in connection with a charge that he abducted and raped a 14-year-old girl in February 2021.

Stapleton was also awaiting trial before the High Court in connection with his alleged rape of a 19-year-old secretary of Ottley Hall in October 2018.

iWitness News is also not aware of any link between the charges against Stapleton and his death.