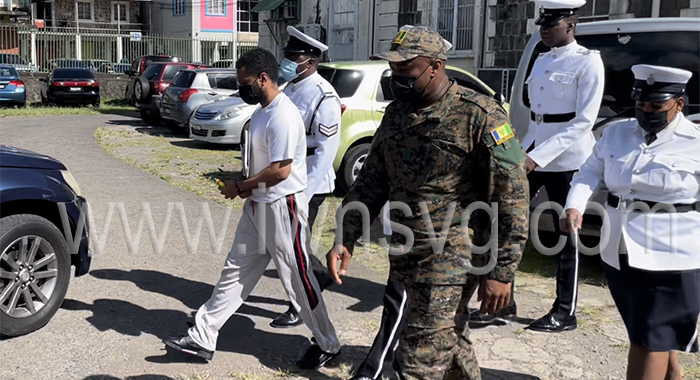 Detective Sergeant Malcolm Alexander conducted the interviews in April 2016, during the investigation of the murder of Sharlene Greaves.

Primus, 35, of Vermont, is being tried for murder over the death of  Greaves, 33, a real estate agent, whose body was found on Nov. 13, 2015 with multiple stab wounds at her office in Arnos Vale.

Alexander testified in the trial on Friday, with his evidence largely related to the electronic interviews, which were shown in court.

The cross-examination takes place as the trial, at High Court No. 1, in Kingstown, continues before Justice Brian Cottle.

iWitness News is delaying reporting on the details of the evidence, at the request of the prosecution, in an attempt to avoid influencing the testimony of other witnesses.

Alexander along with detective Corporal Edmund Ollivierre, then a constable, conducted the interviews with Primus at the Criminal Investigations Department (CID) in Kingstown, in April 2016.

In two of the interviews, his then lawyer, Michaela Ambrose, represented Primus.

Primus, however, asked that the third interview be conducted in the absence of his lawyer but that his uncle, Leviticus Primus, a retired police officer be present.

At one point during the post-lunch period, Wyllie got up and walked out of the courtroom without asking to be excused, while one of the interviews was being shown.

The judge asked that the video be paused, saying that the trial could not continue in the absence of Wyllie.

“I don’t know what to say. This is not normal,” Justice Cottle said.

When Wyllie returned to the courtroom, he told the court that he had a back surgery last year and it aggravates him if he sits too long.

Justice Cottle, however, told the lawyer that he cannot just leave the courtroom since Primus has to be represented at all times during the trial.

The judge told Wyllie that he could stand if this helped.

“We will continue with the DVD,” Justice Cottle said.

Wyllie commented that he had seen them three or four times before.

The lawyer stood for some time during the remainder of Friday’s hearing.

Alexander was one of three detectives who testified on Friday.

Sergeant Mark Billy told the court that he was stationed at CID in Kingstown on Nov. 12, 2015, when he was dispatched in response to information related from police control.

The court also heard the evidence of detective Corporal 657 Marvin Westfield, attached to the Major Crimes Unit, who was among a party of police officers who executed a search warrant at Primus’ home in Vermont on April 18, 2016.

He told the court his duties include communicating with members who have loans and are in default.

“You would touch base with them to find out what is what and can do negotiations with them as to a lower payment,” Findlay said.

“Also, part of the duties involves repossession of vehicles or other assets and foreclosure proceeding pertaining to sale of a property.”

Counsel Vynnette Frederick and Sunel Fraser have appeared along with Wyllie, the state-appointed lawyer for the accused.

Assistant Director of Public Prosecution Karim Nelson, along with Crown Counsel Kaylia Toney, and John Ballah, a counsel for the Crown, are prosecuting.

The 12-member jury is made up of five men and seven women.

Primus made national headlines in 2016, when he was arrested and charged for Greaves’ murder as police investigated a report by Mewanah Hadaway, of Vermont, that Primus held her against her will at a house in Vermont for four months ending April 2016.

Primus was charged with abduction and sex charges in connection with Hadaway’s allegations.

However, the charges were withdrawn in 2017 because the virtual complainant was not available to testify at the preliminary inquiry in 2017, having migrated.

Primus escaped from prison twice between 2016 and 2020 as he awaited his murder trial.

He is also wanted in New York in connection with the 2006 murder of 16-year-old Chanel Petro-Nixon.