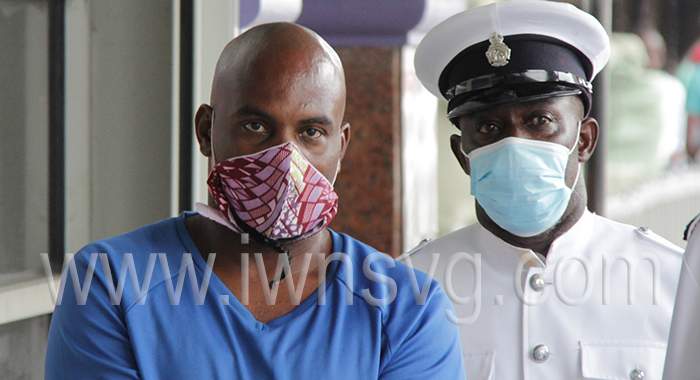 Rapist Terrance Dasent, left, is escorted to prison on Wednesday, June 29, 2022 to serve the remainder of his sentence.

A man who abducted a woman, raped her three times and forced her to perform oral sex on him as many times during a 10-hour ordeal in a bushy area of Kelbourney, will spend 13 years and 3 months in prison and must enrol in any sexual therapy programmes available to inmates.

However, the man, Terrance Dasent would have been spending thrice as long in prison had his sentences for each count of rape not run concurrently.

Further, when he was sentenced on Wednesday, the 36-year-old omnibus conductor, of Kelbourney, had been in prison for two years, 11 months and 11 days.

He was sentenced to 2.06 years for adduction, which means that with the sentences running concurrent to that for rape, he has already served his time while he was in custody.

The same applied for the indecent assault charges, for which he was sentenced to 162 days in prison on each count.

Request for help leads to rape

According to the facts, presented by Justice Teelucksingh, the victim, then a 33-year-old mother of four children, aged 1 to 12 years old, first met Dasent in Kingstown sometime before July 15, 2019.

They were not in a relationship.

Then, on July 15, the victim met Dasent in Kingstown and asked him to assist her to pay her water and electricity bills, which amounted to EC$400.

Dasent agreed and the woman gave him her cell number, as she was about to board a passenger van.

He called that evening and they spoke.  The following day, the victim telephone but did not reach Dasent. He later returned the call and they agreed to meet.

Dasent asked to speak to his victim’s father and did so on the phone. The victim left home around 11 a.m. that day and contacted Dasent who told her to meet him at a particular area in Kelbourney.

On arrival at the agreed area, the victim contacted Dasent who met and told her that his aunt was going to lend him the money.

He pointed to an area as the direction in which his aunt lived and told the woman to come with him. Dasent led his victim into a moist, forested area and as the journey progressed, the woman noted that there were no houses in the area and asked Dasent about this.

He reassured her that they would soon reach his aunt’s house.

The duo walked past a cliff and Dasent stopped at a concrete structure that was covered with vines. He pretended to be tired then turned around and kissed the victim on her mouth. She pushed him away.

Dasent then drabbed the woman and began to fondle her breasts and put her hands behind her back. He removed her pants and underwear and raped and ejaculated in her, while not wearing a condom.

The victim asked Dasent why he did not say that he wanted to have sex with her and he replied that she would not have agreed.

He then told her that his aunt lived nearby.

The woman began screaming and running in the direction from which they had come. She fell down and Dasent then grabbed her by her shirt and pulled out a knife and demanded to know why the victim had run and screamed.

He pointed to some dirt steps and told her to go in that direction. The victim saw four shallow holes.

While still holding the knife, Dasent took the woman to one of the holes and forced her to perform oral sex on him.

Dasent then ordered her to undress, but she refused and he threatened to use the knife.

The woman complied and he ordered her to lie in one of the holes and raped her again — discharging in her a second time.

The victim got up and Dasent ordered her to dress and he then put the knife in his pocket.

He told the woman that he had thrown the bodies of other rape victims over the cliff.

Dasent instructed the woman to take off her clothes again and when she protested, Dasent became enraged and pulled the knife from his pocket.

Still armed with the knife, Dasent again demanded that the woman perform oral sex on him.

He then ordered her to lie in the hole again and raped her again, without any condom and discharged in her.

Victim begs to be released

The victim continued to plead with Dasent to let her go so that she could return to her children.

But Dasent ordered her to shut up, saying that he did not want to hear about her children.

The victim’s cell phone rang twice and Dasent allowed her to answer.

He told her that he had a daughter and did not want to go back to prison.

The woman pleaded with Dasent to release her, but he said he was concerned that she would uproot the matter to the Police.

The victim attempted to reassure him that she would not.

Dasent then used the flashlight from his victim’s cell phone to make their way back to the main road.

She asked for water to wash her muddy feet and Dasent pointed out a standpipe where she washed her feet.

A police officer was at the main road and Dasent asked him for a dollar, as the victim had no money for a van.

Dasent remained with his victim until she got a van.

While they were waiting, he spoke with the girl’s father on the telephone about her late return home.

The woman did not get a van until about 9 p.m. and when she got home, she told her father what had happened and reported the incident to police.

Police interviewed Dasent, who told them that the sex was consensual and that he had given the woman $600.

Dasent was initially unrepresented and pleaded not guilty to the charges but changed his plea to guilty after receiving legal advice.

‘a threat to other women’

In her sentencing remarks, Justice Teelucksingh pointed out that the May 11, 2022 social inquiry report said that Dasent comes from a close-knit family but his family said the relationship deteriorated because of his constant lying.

However, to his credit, the chief prisons officer described him as an obedient inmate who was “willing to help and works well in the workshop”, the judge quoted the report as saying.

There was a mixed response from the community with some saying he was “a good guy in the community”. One woman said she and Dasent “went well and she was surprised by the incident as he never passed his place with her. He is friendly and jovial”.

However, some residents expressed concern about his release as they found the area to be peaceful since his incarceration.

Another resident described Dasent as “not a nice guy and a threat to other women in the community”.

‘I was fearful for my life’

Meanwhile, the victim said she was traumatised by the incident and was unable to sleep at night, as she would experience flashbacks.

The judge further said that when the incident occurred, the victim said, “I was fearful for my life. I thought he was going to kill me.”

She further said she felt as if she was not going to see her children again and was also afraid that she would catch a sexually transmitted disease from Dasent, as she did not know about his health status.

The victim further told the caseworker that she had difficulty eating and was relieved when Dasent was taken into custody.

However, Dasent continued to call her on her cell phone even while she was in prison and also used other people to call her.

The victim said she no longer feels safe travelling from her home and tries to reach home before dark.

She is also no longer comfortable sleeping at her home.

She avoids television shows about criminal activity and avoids shows and conversations about rape.

‘sorry from the bottom of my heart’

In identifying the mitigating features of the case, the judge noted that on May 30, Dasent told the court that he was  “sorry from the bottom of my heart and wish to see the young lady to apologise to her”.

The court saw this as an expression of genuine remorse and considered it a mitigating factor on each count.

After consulting the sentencing guidelines, she saw the charges as category 1/exceptional because of the extreme psychological harm to the victim.

The judge said there was evidence that the victim is severely traumatised, having indicated that she relives the memories and was no longer comfortable in her own home and sleeps elsewhere.

She also concluded that the crimes were of level A/high seriousness in that it was abduction, there was prolonged detention, and it was a sustained incident where the victim left home around 11 a.m. and returned home around 9 p.m. that night.

On the rape charge, the judge began with 75% of the maximum sentence — life imprisonment, a notional sentence of 30 years.

This amounted to 22 years six months.

She identified as aggravating features of the offence, the prevalence of the offence and the fact that Dasent ejaculated in his victim without the use of a condom, thereby putting her at risk of contracting STDs.

The judge, therefore, increased the sentence by three years, taking it to 25 years and six months.

Mitigating on behalf of the offender was his genuine remorse, the fact that prison authorities had described him as an obedient inmate, and one member of his community had said he was “a good guy” in the community, while another indicated that they went well and he never passed his place with her and was friendly and jovial.

The court adjusted the sentence downward by one year.

This took the sentence for each count of rape to 24 years, six months.

Dasent was given a full one-third discount on each count for his guilty plea, which brought the sentence to 16 years and four months.

The time spend on remand was deducted, leaving a sentence of 13 years and three months for each rape charge.

The judge said that the aggravating features of the sexual assault charges was the fact that they occurred during an abduction, a weapon was used to frighten the victim and there was contact with the genitalia.

The maximum sentence for this charge is two years in prison and the judge began with a sentence of 243 days and applied the one-third discount, arriving at a sentence of 162 days, which was covered by the time Dasent had spent in prison.

On the abduction charge, Dasent faced a maximum of five years in prison, and the court began with a sentence of three years and eight months, which was increased by six months after the court considered the aggravating feature, namely the prevalence of the offence.

The judge subtracted one year for the remorse Dasent’s had shown and applied the one-third discount, arriving at a sentence of 2.06 years.

The court also ordered that a copy of the order be served on Dr. Karen Providence at the Mental Health Rehabilitation Centre.