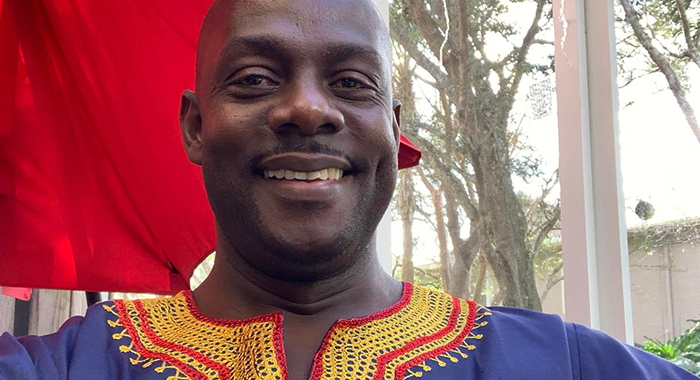 Sean Rose, seen here in a photo posted to Facebook account on Jan. 1, 2022, will become head of API on July 1.

A former employee of the Agency for Public Information (API), who left in 2006 to pursue other interests, including opposition politics, is returning as head of the agency.

Prime Minister Ralph Gonsalves has announced that Sean Rose is tipped to become Director of the API tomorrow (Friday), July 1.

Gonsalves made the announcement as he spoke on radio on Sunday about the dissemination of public information in relation to the port project in Kingstown.

“Hopefully, too, that the improved [API] with a new leader whom we are hoping to be installed on the first–” said Gonsalves, who is also minister of information.

He went on to announce that Rose has been approved as director of API.

“He will go through the normal process. There’s a contract with the chief personnel officer who’ll have to sign with him sometime this week,” Gonsalves said.

He said he had had “a long conversation” with the deputy director on Friday.

“A good person and I’m sure that they will all work together,” he said, referring to Nadia Slater, who has been at the agency for 20 years.

Slater holds a first degree in media and communication with a minor in international relations and is pursuing a master’s degree in linguistics.

“It’s a public secret. So as well I don’t play games and just call his name,” Gonsalves further said of Rose’s appointment.

Rose replaces Jennifer Richardson, who held the post from May 2018 to May 2022, after 13 years as chief communications officer at the International Airport Development Company.

“It is with regret that I inform you that my stint as Director of the Agency for Public Information has ended. At the end of today Friday May 6th, 2022 I will no longer be at the agency,” Richardson said in an email to the media, announcing her departure from API.

Richardson’s contract was not renewed days after the prime minister publicly criticised the API over its work.

iWitness News understands that among other things, the government was privately displeased with the agency’s coverage of the 21st anniversary of its election to office in March.

Sources in the know told iWitness News that Rose’s appointment, depending on his leadership style, could deepen resentment at the agency, where, for the third consecutive time, the government is “importing” a director, rather than promoting from within.

Before Richardson, Dionne John was transferred from NBC Radio to the API and was appointed director, before returning to NBC Radio as general manager.

Additionally, Rose is being appointed to the helm of the agency six years after he failed in his bid to become the opposition New Democratic Party’s candidate for South Central Windward.

Sources in the know told iWitness News that some members of the Cabinet argued strongly against him heading the API.

In September 2016, Rose, who was then based overseas, failed to secure any of the 29 votes as the NDP’s South Central Windward constituency division met to select a new candidate.

All of the votes went to Israel Bruce, a lawyer, who went on to represent the NDP in the 2020 general elections, in which the ULP’s Saboto Caesar’s margin of victory fell from 588 in 2015 to 239 in 2020, as he secured a third five-year term in office.

Shortly after losing in the NDP primary, Rose became an activist for the ULP.

Commenting on this in 2020, NDP Vice-President, St. Clair Leacock, who presided over the primary in which Rose was defeated, said:

“One who was as clear, firm, strong, decisive, precise, committed, dedicated, gung-ho, wanted-it-badly, the minute he lost, he went on and threw his support to the Unity Labour Party and you hear him on radio from time to time…

“You are left sometimes to ask what manner of people are these but it’s their right. That’s what democracy allows for and Bruce is soldiering on now and doing a damn good job at it and I believe he will do extremely well in the elections.”

Rose holds a Bachelor of Arts degree in media and communication and has also worked in the media in the British Virgin Islands.

On Thursday Rose told iWitness News that the directorate of the API is “an important undertaking.

“We do recognise that we have to transform, revolutionise and improve our communications platform here in St. Vincent and the Grenadines. And you and I would agree both in the public and private sector, with respect to the media aspect of things, generally speaking, as a communications practitioner, like yourself, I’m excited about helping with the development of our national communication platform, specifically from the level of public affairs. With respect to the free press, I leave that to you.”

Ask about the special skills and experience that he brings to the API that would  result in the “improved” API that the prime minister spoke about, Rose told iWitness NEws.

“Well, I wouldn’t be so individualistic with that outlook. I think that might be part of the problem. We can’t be individualistic with respect to communication. You understand this very well; many people do as well. This requires team effort so any reference to specific skills must take into consideration our ability, collectively speaking, to embrace teamwork.”