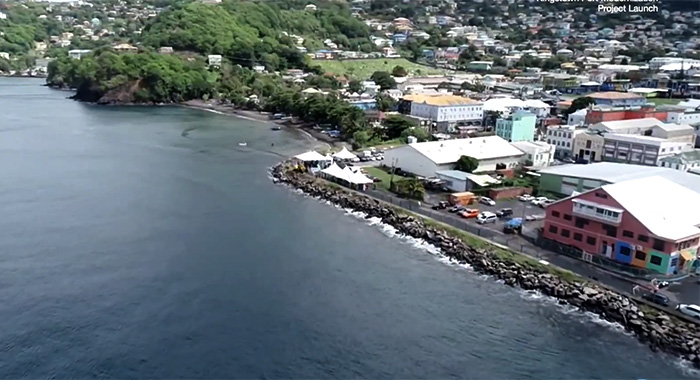 The reclamation site in Kingstown, with Rose Place at left of image.

The US$250 million new port to be built in Kingstown will reclaim six hectares, spanning from North River to the Kingstown Fish Market.

The project is part of the government’s “strategic aim to improve physical infrastructure and the working environment at the port as a vehicle to deliver economic growth while supporting improve livelihoods, poverty reduction, and safer conditions for citizens”.

At the project launch in Kingstown, on Friday, project manager, Lenski Douglas noted that that the new port will replace the Kingstown Deep Water Wharf, which was built between 1962 and 1964.

He noted that the container park, as an extension of the port, took place in 1979, the Grenadines Wharf was built in 1972 and that the Campden Park Container Port and the Cruise Ship terminal were built in the 1990s.

Douglas said that the new container port will be climate resilient and have the potential for future expansion.

“Acknowledging port development as being critically important for the future economic growth and development of St. Vincent and the Grenadines, this project master plan was designed to minimise the disruption and is based on seaward reclamation as opposed to utilising existing waterfront properties,” he said.

He said the new infrastructure development should act as a catalyst for redevelopment of Rose Place, a community to the west of the port, whose fisher folk are being relocated.

“We are witnessing the early stages of this transformation,” Douglas said.

Douglas said construction of the port is the first of a three-phase port development programme.

He said that to clear the project footprint, the sewer line operated by the Central Water and Sewerage Authority will be rerouted

“Project affected persons are subjected to resettlement actions, and the required road works to integrate the completed modern facility into the Kingstown Road network will also be done,” Douglas said, adding, “The facility will house accommodation for all critical port related stakeholders.”

The contractors, Aecon Group Inc., of Canada, will be supervised by Sellhorn of Germany, both of which signed contracts with the Government of St. Vincent and the Grenadines on May 3.

Douglas noted that the cargo port project is the second largest capital project being implemented by the government.

The project is being funded by a US$110 million loan from the Caribbean Development Bank (CDB), a grant of about US$32 million from the CDB-administered United Kingdom Infrastructure Fund, and a US$43 million contribution from the Government of SVG.