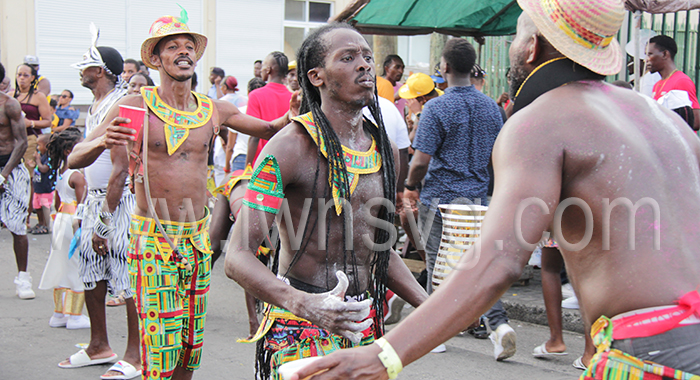 And, he has a word for the younger artiste who feels that he should retire to allow them to blossom.

“They have to sit back and learn,” Fireman said Sunday night during an interview with musician and activist Bryan Alexander, which was posted to Facebook.

Ahead of and after Saturday’s show, some people called for Fireman to retire, saying that doing so will allow young artiste to emerge.

But Fireman rejected this, saying it is a sure way to kill Vincentian carnival culture.

“I am just such a humble guy… Thanks to all my fans. St. Vincent and the Grenadines, the greatest place on Earth and thanks to the people who organise the show, all the artistes, all the people; I can’t start counting everybody.

Regarding the calls for him to retired, Fireman said:

“Well, first, retirement age is 65. I ain’t get there yet so I can’t retire. Who will take care of my family?”

He said that while people will talk, Saturday night “was a good example to show the new guys, or the young guys as they call them, that I am still here and I know how to run the show and the people still need a show. So I am doing a show for the people who need a show. The new guys have to learn. They have to sit back and learn.”

The artiste, who won his first soca monarch crown in 1999, said that he learnt from the bands Touch, Blacksand, Hottsand, Resurrection, as well as artistes such as Alston “Becket” Cyrus and Winston Soso.

“There wasn’t any fight down. The young people mean you must move and give them your seat. It’s not like that. If we do that, we are gonna kill the culture, kill the art form, somebody has to steer the ship,” Fireman said.

“Imagine taking me out of carnival or Soca Monarch. We don’t have no bands like that because most people try to run the bands because the new people, or the young people, ‘We want a DJ to play. We want a DJ on a truck.’ When last you had a good lap around town for carnival? You can’t tell because there are no bands and the music starts with the bands.”

He said that a young woman asked him recently why only Fire Empress and Shaunelle McKenzie are singing.

“I said because bands used to make the female artistes. You moved from a back vocal, the females, to a front stage. And I said since there are no more bands, we have no more back vocals, we have no way to train them to become lead vocalists and that’s what’s lacking.”

Fireman said that bands used to be on the road for J’ouvert and they used to launch albums.

“We don’t have that anymore and DJs want to run the show and it can’t happen that way, because music start with the bands.”

Facebook has become the platform of choice for Vincentians to express their opinions on current affairs, including the various VIncymas 2022 competitions.

“All I am saying is, we need to fix culture or we will lose culture. We have had bigger Soca Monarch [shows] than this. Now, you have artistes who don’t want to compete, you have artiste who believe they are bigger than the game. All I just want is somewhere to just do culture in the right way and make sure that everything is OK.”

Meanwhile, having already dominated the Soca Monarch competition, Fireman said he could be winning more titles for Vincy Mas 2022, the first since 2019 as a result of the COVID-19 pandemic.

He said that winning the Road March title is also very likely.

In 2014, fireman won the Ragga Soca crown with “Rum Meeting” and the Power Soca title with “Unruly”.

He said that “Bad Demon”, which secured the Power Soca Crown on Saturday, is also in the running to win the Road March title.

One reply on “‘Sit back and learn,’ Fireman advises young artistes (+video)”