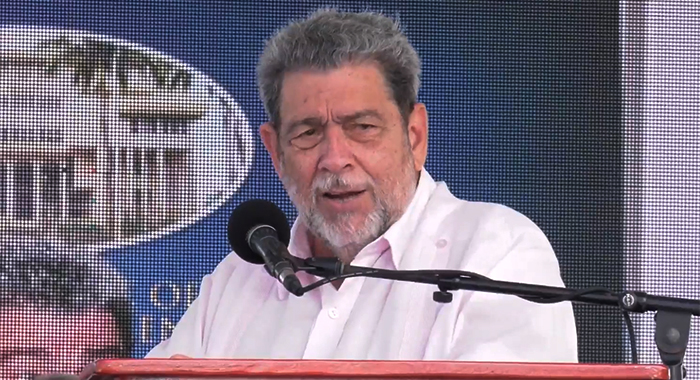 Prime Minister Ralph Gonsalves has lauded the 300 million pounds sterling UK Caribbean Investment Fund, which suffered a bad name after it was announced in Jamaica in 2015, where 25 million pounds went to building a new prison.

The United Kingdom has given St. Vincent and the Grenadines a grant of around 27.7 million pounds from the fund to help build a US$250 million port in Kingstown.

Speaking at the launch of the project in Kingstown, on Friday, Gonsalves thanked the UK Government for its contribution to the project.

“And I want to thank the successive British governments. Initially, this UK Caribbean Investment Fund programme was initiated by the government of David Cameron, and wherever he is, I want to say thanks to him,” the prime minister said.

“I want to say thanks also to his successors, Theresa May, who didn’t pull the plug on what had already been agreed upon. And it would have been open to her to pull the plug. And so, too, Boris Johnson, the current prime minister,” he said.

“Good news don’t often get told, or you have some difficulty in getting the good news told nowadays. Particularly when an item comes up in the news, if it is juicy and salacious, the Facebook warriors get a hold of it,” Gonsalves said.

In 2015, the British prime minister announced that the government will invest 300 million pounds in roads, bridges and ports through a new UK-Caribbean Infrastructure Partnership Fund to help drive economic growth and development across the region.

Gonsalves said that when Cameron announced the fund in Jamaica, they had spoken hours before at the United Nations.

“Had he told me that he was going to talk about the prison, I would have asked him to talk to [then Jamaica Prime Minister] Portia Simpson-Miller, that even though y’all had agreed on that, maybe you just announce the grant without saying what it is going to because it caused quite a storm.”

He said some people spun the donation to suggest “that they were building a prison to have Jamaicans who are in jail in England to be put in a jail in Jamaica. And you know, that whole commess (melee) blight, the CIF in the eyes of people who didn’t know what the CIF was about.

“Today, publicly, we can say, as St. Vincent and the Grenadines, and I can say it as the longest-serving prime minister in the Caribbean, I thank the British government for the Caribbean Investment Fund.

“Its conceptualisation and its delivery and here in St. Vincent and Grenadines we are getting free a grant — this is not reparations money, we talking reparations separately. This is something different — of nearly 100 million Eastern Caribbean dollars to this project.

“Thanks from the bottom of my heart. So that I hope all those who castigated the CIF that we will rescue it from castigation and bring it into the sunshine of approval,” Gonsalves said.