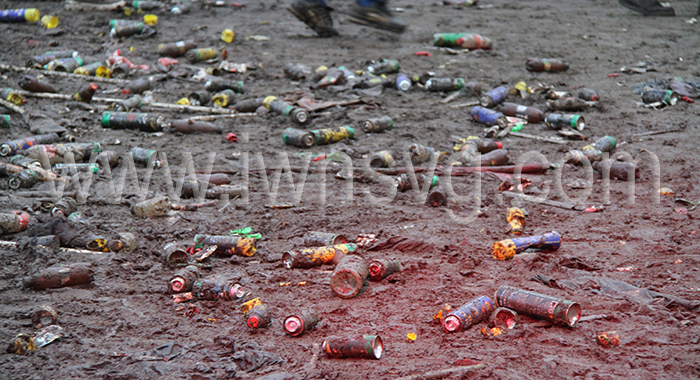 Bottles and cans at Victoria Park after the end of the Soca Monarch competition on Sunday, July 3, 2022.

The Carnival Development Corporation (CDC) says it has always asked the police to enforce the law regarding incendiaries and the No Glass Bottle Policy at the Victoria Park during Vincymas events.

Saturday night, scores of police officers stood by and took no observable steps to stop the large number of patrons using insecticides as flamethrowers during the Soca Monarch competition.

Further, on Sunday morning, as patrons partied after the last competitor exited the stage, some patrons threw projectiles, including plastic and glass bottles and insecticide cans in the air, resulting in injuries to a number of patrons, who had to be treated in hospital.

At one point Superintendent of Police Trevor Bailey, dressed in his green camouflage uniform, walked on stage and appeared to talk to Rochard “Pitbull” Ballah, a senator, who was also one of the MCs at the show.

Ballah called on patrons to stop throwing projectiles, saying that the police had said that they would shut down the event if patrons persisted.

Ballah also said that about a dozen people had had to seek medical attention for injuries sustained as a result of the projectiles.

A few minutes earlier, Problem Child, a guest artiste at the show, interrupted his performance to ask patrons to put back up the barricades in front of the stage that they had thrown down.

Earlier, when one patron breached the barricade and entered the area where the media was stationed, iWitness News approached a uniformed officer from the Special Services Unit and asked him to tell the patron to exit the area, which is reserved for media and persons involved in the production of the show.

The officer did not ask the patron to vacate the area.

CDC Chairman, Ricky Adams addressed the issue of the throwing of the projectiles when he spoke on VC3, a state-owned cable television station, on Wednesday.

Adams said that a couple years ago, he stuck his head out and said that the CDC did not want incendiaries at its shows.

“And I was beaten all up Bay Street down Backstreet. People told me that’s our culture, why am I trying to stifle our culture, and ‘da is we ting’. People sang soca songs on it and everything like that,” Adams said.

“Unfortunately, again, this year, we’ve seen a proliferation of the flames on the grounds in Victoria Park. And we’ve seen them taken to another level where they’re beginning to throw things and that kind of stuff.

“We’ve always asked the police to enforce the law. And we know that having objects that are dangerous to the public, in a public space is against the law, we’ve always had a very strong, no bottle policy,” the CDC chairman said.

“And again, we’ve asked the police to monitor that and enforce that. I think the police themselves have come out with a statement. So my understanding would be that when the festival comes around, again, that they will be a lot more vigilant in terms of enforcing those policies,” he said.

On Sunday evening, hours after the incident, the police condemned the throwing of projectiles, saying, “This is a dangerous practice and should stop immediately.”

The police reminded event organisers, operators of bars, and all patrons attending shows during the Carnival season of Regulation 3 “No Bottle Policy”.

A person who fails to comply with the prohibition of regulation 3 commits an offence and is liable on summary conviction to a fine of not exceeding EC$500.