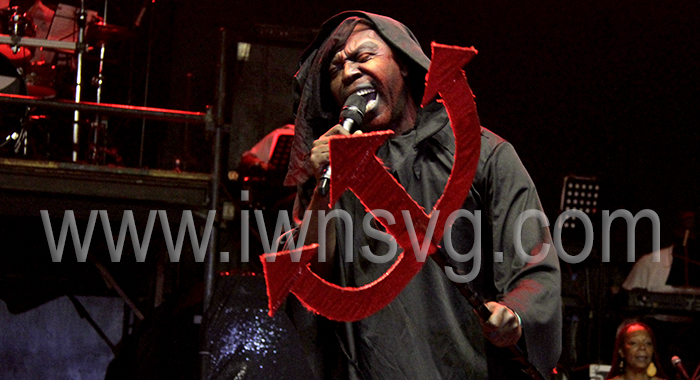 “I don’t know if you are aware that I do a lot of writing for Fireman, including the ragga soca song that he won with and co-wrote the one that he won the power with. So it is basically one team winning all three crowns,’ Tajoe told iWitness News on Thursday.

It was a repeat of 2011, the first time that Tajoe won the calypso monarch, when he reigned alongside Delroy “Fireman” Hooper, who won the Power Soca competition.

Tajoe said that during the 11 years between his victories his love for the art form inspired to continue singing.

“There is nothing else really for me to do where carnival is concerned in terms of calypso, even talent,” said Tajoe, who is involved in preparing presentations for other components of the festiva.

“I have done all of it. So I am just a lover the art form. If I am to win, I win. But even if I don’t win, I’ll still participate because of the love I have for calypso,” said Tajoe, an educator who teaches social studies at Sandy Bay Secondary School

“It’s a very elating and exciting feeling to have won the crown a second time,” Tajoe told iWitness News of his victory, adding that when he set out this year, he did not envision that he would have won.

“I knew I had a good song going into the competition but sometimes you might start off with a good song, you yourself would know that you have a good song, but at the end of the day, the decision lies in the hand of the judges.

“So, what I am saying isn’t that I wasn’t confident that I had a great song, but, at the end of the day, you have to cross certain hurdles before you reach to that part of winning and part of that lies in the hands of the judges.”

Tajoe’s winning competition, “Playing Devil’s Advocate”, was about securing a job in hell to burn fire on evildoers.

“The concept came to me while I was sleeping so I woke up and jot down the first verse and chorus. That was on May 21, 2021 ad I had it there on my tablet because we weren’t certain that we were having carnival so I didn’t push for it.”

Vincymas returned this year for the first time since 2019 as a result of the COVID-19 pandemic.

Tajoe said it was not until it was confirmed that the festival would go ahead that he completed the song.

This year, calypsonians were required to sing only one song, rather than two, as had traditionally been the case.

Tajoe said he thought that the fact that it was a one-song competition gave him an advantage “because my song stood out more than everybody else.

“Maybe if we had a second round, maybe this one would have stood out and the other one would not have stood out as this one. So I think I had an advantage because the song took off as soon as I opened in the tent, from the tent level.”

He said that based on his discussions with other calypsonians and some members of the CDC, he thinks that the one-song format is best.

“When you have to be back stage waiting to do two rounds of calypso, it is really, really tiring and you really don’t get the best out of the performances, out of the calypsonians,” Tajoe told iWitness News.

“What it does, it allows calypsonians to bring their A-game and to come up with the best concept and I think we had a really competitive finals. Because it was one song, people brought their A-Game. That is a plus,” he said of the one-song format.

Before he began singing himself, Tajoe has been writing for competitors in the Junior Calypso competition.

He said he resumed this year but felt that the student was not yet ready to take the stage.

“Hopefully, next year, I will have some students in the competition,” Tajoe told iWitness News.