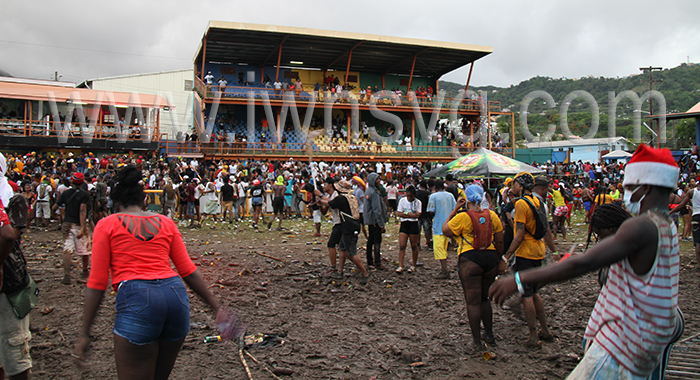 It was daybreak by the time the Soca Monarch show, which began overnight, ended on July 3, 2022 at Victoria Park, in Kingstown.

The Carnival Development Corporation (CDC) says it is once again reviewing the length of the Soca Monarch competition, which ended just before 6 a.m. last week Sunday.

The first competitive performance in the show began at 11:05 p.m., two hours after the scheduled start, with no explanation for the late start, even as state-owned cable television station, VC3, charged people outside of St. Vincent and the Grenadines US$45 to view a live stream of the event.

The Ragga Soca segment of the show ended at 1:40 a.m. Sunday morning, paving the way for the power soca category, which ended shortly after 5 a.m.

“Interestingly, the last time we had Vincymas prior to this year, we were actually able to cut down the time,” CDC Chairman Ricky Adams said on VC3, on Wednesday, one day after Vincymas 2022 ended.

He was referring to 2019, the year of the last VIncymas before the COVID-19 pandemic, which placed the festival on ice for two years.

“This year, we actually had some technical challenges, we had an electrical issue at the Park, just as it got dark and we suspected it had to do with water damage to one of the pieces of equipment. So, that actually delayed our start time. And because the bands were doing sound checks, and so at that point in time, but we still feel that we need to tighten up that show,” Adams said.

He said that one of the challenges in cutting down the length of the show is that artistes are “becoming now a lot more sophisticated with the props that they’re using.

“Because Soca Monarch is show time for St. Vincent and so, sometimes, setting up some of those props takes a while. And, of course, we have to remember that on competition night, we have quite a number of artistes in both segments. And everybody wants to put out their full performance. So that becomes a bit of a challenge.”

Adams, however, reiterated that the CDC was able to reduce the length of the show before.

He said that the CDC had a number of technical challenges this year.

“As I said to somebody earlier, it was important that we have this Vincymas, so that we can learn how to do it again. And so that by the time we get to next year, when we will be back to a full blown Vincymas, and hopefully have a lot more travel arrangements in place, etc., hopefully, we would have ironed out the bugs and the kinks.”

Adams said he had heard a story of a technical provider who pulled out his equipment and three of four pieces were not working because they had not been used for two years.

“So that’s why I say it was important for us to have the Vincymas for us to, again, look at those things and have them addressed by next year,” Adams said.

He said the CDC has toyed with the idea of separating the Ragga and Power Soca competitions into two shows, as had been done a number of years ago.

“… but I think for now we are looking at keeping it as a joint show,” Adams said.