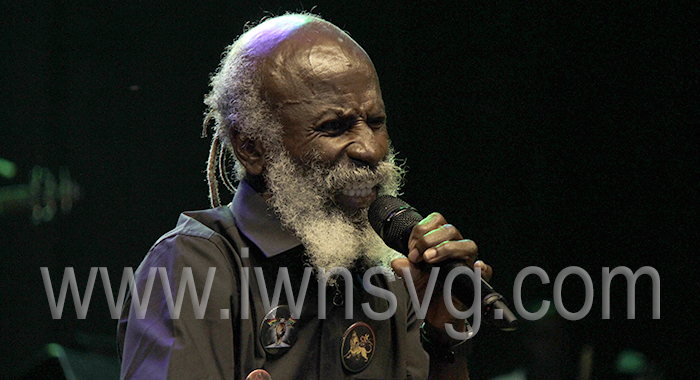 Calypsonian Alvin “Zion-I” Dennie says he was not surprised by the decision of government-owned cable television station VC3 to not broadcast his hard-hitting 2022 calypso, “Hypocrites”.

He said the decision proves the point that the song makes about people pretending to act in the interest of calypso.

He told iWitness News, on Thursday, that he was not aware, initially, that the station did not broadcast the song during Sunday’s finals, at which he was the first performer.

“… a few people who probably was involved in paying for the broadcast, they commented to me that my presentation wasn’t broadcast,” the 63-year-old artiste told iWitness News.

Anthony Dennie, the station’s acting operations manager and coordinator of shows at the Carnival Development Corporation, told iWitness News separately, on Thursday, that the station did not broadcast Zion-I’s song over concerns that some of the content could be defamation.

VC3 took the decision although Zion-I had changed the lyrics of the song in keeping with the recommendations of the CDC’s legal advisor.

In doing so, the station denied paying subscribers the opportunity to see the first performer at Sunday night’s calypso finals and some patrons took to social media to complain.

“Well, to me, it didn’t surprise me because, honestly speaking, I expect anything from these guys; anything in the adverse when it comes to me,” Zion’I told iWitness News.

He said he had changed the lyrics of the song after he made it to the semi-finals because CDC’s Chief Executive Officer, Ashford Wood told him that the CDC’s lawyer had recommended the changes.

“So they said to me, in order for me to appear on the show, I have to change and if I don’t, then I can’t be on the show”

Zion-I said he made some changes to the lyrics in the presence of the CDC officials.

“But after close consideration, I realised those changes are rather weak. So I made some changes on my own that I know would not offend them. That was the ultimate part of the game.”

He said that he sang the amended lyrics in the semi-finals of the competition and there were no complaints from the CDC.

“Absolutely no feedback; no complaints after the semis,” Zion-I said, adding that the version of the song that he sang in the semi-finals and finals were the same, except for the ad-lib at the end.

“I thought there might have been some penalties from the judges with the ad-lib I used in the semis so I changed that on my own without submitting it to them.”

Zion-I told iWitness News that after his presentation at the finals there were “absolutely no complaints” from the CDC, VC3 or any other media house.

“The night in the semi-finals, … about 10 minutes before I come on stage, I was confronted by a contingent from CDC, and tent leader and association president, a of number them come and tell me anyhow I drop a line that they told me, I wasn’t supposed to sing they plugging out my mic,” Zion-I told iWitness News.

He said he was tempted to not sing at the semi-finals but did so because he knew that patrons were looking forward to his song, and not performing “would have made people feel unhappy.

“So I just did it with some anger in me. I wasn’t myself in the semi-finals. But in finals, I tried to be myself. But the season went against me. I ain’t surprised with all that happened; I ain’t surprised.

“But you see, if we don’t change our lifestyle in St. Vincent about how we are dealing with artistes, it could end up into real controversy. Not every man can sit down and hold things. Some men does react,” Zion-I said.

Zion-I said that what happened during the competition “absolutely” demonstrates some of the things he sang about.

“It is the height of hypocrisy and in some way or the other I was not surprised because if you notice at the beginning of the song when I start singing about calypsonians and their hypocritical ways and so forth, I knew I am up against a bunch of hypocrites really and so the song really speaks out for itself.”

He said that to take part in the competition, calypsonians had to sign a contract with CDC regarding appearance fee and an agreement to change lyrics of songs if they are perceived to be defamatory.

He said that the controversy surrounding his song came in a year in which he had no intention of taking part in the competition at all.

“First, I never expected to sing in the competition because I know the contents of my song would have been controversial. And I know that these judges kind of thin skin. And I just had decided to just launch the song and cool out but the guys in the tent asked me please to come in the tent and give the tent a boost.”

Zion-I said that even a few days before the competition, fellow tent members were still begging him to compete.

“Because I said to them, man, I’m not interested in the competition. Because that is how I plan to sing, really. That was my intention, not to go back into competition, because competition is something that if you’re not careful, breaks you down to nothing in the art.”

He said that when competing, bards have expectations, and when they are not met, “if you ain’t strong, you never sing again.

“Yeah, competition is dangerous; very, very dangerous. And I think to my level of calypso in St. Vincent now, I think I passed competition. I supposed to just sing for the nation, and just pay my money to sing and let that go,” Zion-I told iWitness News.