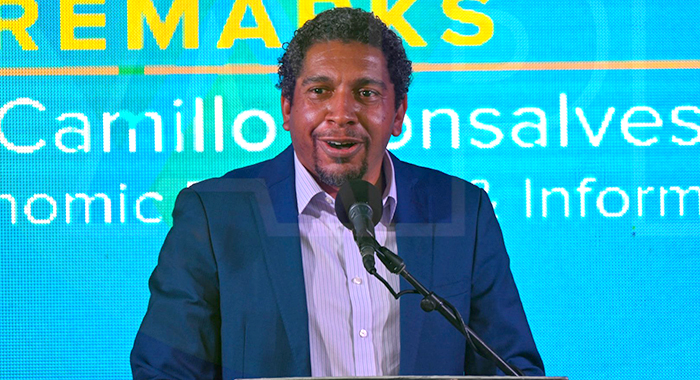 Revenue from fisheries in St. Vincent and the Grenadines moved from EC$8.9 million in 2012 to EC$21.5 million in 2020, says Minister of Finance, Camillo Gonsalves.

“That’s before Rainforest got here,” he said Friday at the opening of Rainforest Seafood SVG Ltd.’s processing plant in Calliaqua.

He said that the fisheries sector showed a trajectory of growth unlike other industries in the court.

He said that the Rainforest Seafood plant was not fully operational but had been “going strong for about four months.

The finance minister said this was “an incredible contribution” to fisheries and the growth of the sector in SVG.

“So we have 80 to 100 people working inside. I spoke to them,” he said of the workers at “Big Blue”, the processing plant’s nickname.

“They are happy, they’re well trained, and they’re well paid for the work that they’re doing,” the finance minister said.

Rainforest SVG is part of Rainforest Caribbean, a Jamaican company that also has processing plants in Jamaica, Belize, St. Lucia, and Barbados and exports to over 30 countries across the world.

The finance minister said his government has signed with Rainforest Seaford a contract that says, “they plan to put into the hands of local fishers not $3 million, but $20 million annually.

“Imagine the wealth that that will create for fisherfolk all across St. Vincent and the Grenadines. What we’re doing with this $3 million so far is scratching the surface.”

He noted the traditional way of fishing in SVG, where crews go out to sea on mornings, spend a few hours and rush back to shore to catch people as they are going home.

The finance minister said that the fisher catch enough to cover the cost of fuel and to make a couple dollars extra.

He said that Rainforest Seafood wants to buy $20 million worth of fish a year.

“That is a doubling, again, of the fish production here in St. Vincent and the Grenadines. And we have the fish in our waters and we have the talented fisher folk. All we need now is to build capacity.”

The finance minister said the government has been doing a lot of work to build capacity to meet the demand created by entities like Rainforests Seafood.

Gonsalves said that the government has repaired and enhanced the Calliaqua Fish Market and partnered with the Kingstown Co-operative Credit Union to ensure that fishers … will have low-interest loans without having to put down a deposit to expand their fleet, to get another engine, to build a bigger boat.

He also said that Prime Minister Ralph Gonsalves has partnered with the Government of Venezuela, through the ALBA Bank for a substantial loan through which the government will purchase commercial fishing vessels to train Vincentian fishers how to fish commercially.

“And that capacity building means more and more local Vincentians making more and more money from selling fish in St. Vincent and the Grenadines,” the finance minister said, adding that the good thing about fishing is that it is far more inflation-proof than agriculture.

“Because, yes, the price of your gas goes up. But you don’t have to pay for more fertiliser, you don’t have to feed it, the fish is in the water. The fish isn’t jumping into your fish pot differently, because inflation is 9% or because gas costs $190. It’s still going to jump into your fish pot, and you’re still going to get a good price for it here in St. Vincent and the Grenadines,” Gonsalves said.