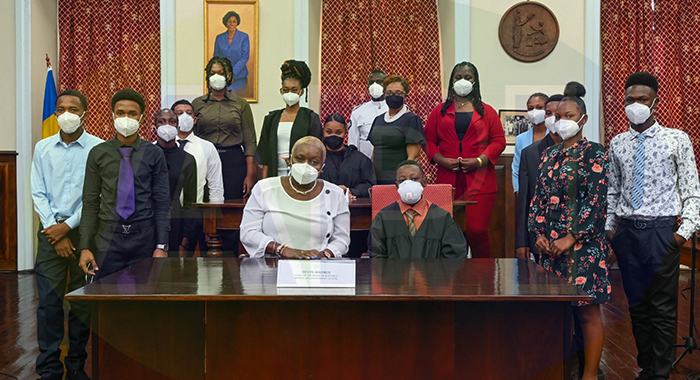 The first sitting of a youth parliament in St. Vincent and the Grenadines (SVG) in over 20 years, on Thursday, debated and “passed” the Education Transformation Bill 2022, with support from both sides.

The debate was for educational purposes only and the “bill” that was “passed” has no legal standing but the debate offered insights into the students’ thinking about transforming education in SVG.

Christian Gleowansingh, a St. Vincent Grammar School student, who was the youth parliament’s East George MP and minister of education, tabled the bill.

It spoke to the educational qualifications of teachers, the school curriculum, safety at school, and incorporating information communication technology into the education system.

In presenting the bill, Gleowansingh said that the children of SVG all deserve to be educated equally, despite their different circumstances.

He said that every child in the country deserves to be educated to the best the nation can offer “so that they can earn an honest living”, adding that the new “law” would ensure this.

The new “law” seeks to promote the education of people in SVG by establishing educational institutions or schools that will foster the spiritual, cultural, moral, intellectual, physical, social, and economic development of the community.

“This will also include the creation of a diverse inclusive education system to provide a more valid, comprehensive and relevant educational service directly related to the changing needs of St. Vincent and the Grenadines,” Gleowansingh said.

The new “education transformation system” would allow for educational programmes to be carried out face-to-face, as well as virtually, due to COVID-19 restrictions.

The bill was supported by the youth parliament’s opposition leader, Stevana Maloney, of Thomas Saunders Secondary School, who made suggestions for its improvement.

The rule allows for students to be excused for certain religious and cultural practices, the youth parliament’s education minister said, adding that students who become pregnant under the age of 19 would be given the option of returning to a school specifically chosen by the Ministry Of Education.

“The education transmission system requires students enrolled in both private and public schools to observe and obey all codes of conduct and other rules and policies for students specified by the Ministry of Education. They are expected to attend classes regularly and punctually participate in educational programmes in which they are enrolled and participate in co curricular extra activities,” Gleowansingh said.

Gleowansingh said the head of staff of schools would be the primary disciplinarian, and appropriate disciplinary measures will be shared, accordingly.

On entering primary school, students would be given a tablet and a laptop to be used mainly for educational purposes.

“They are permitted to carry the tablet and laptop home to keep it safe. So it can last throughout the seven years of primary school or even secondary school. Training on the usage of such devices will be provided along with free access to all online textbooks,” Gleowansingh said.

“Laptops and tablets are not the only property that they are expected to keep in pristine condition but also chairs, desks, and all furniture that the school has to offer. The actions of vandalising, damaging and stealing of furniture will require appropriate disciplinary measures.”

The minister said that the new law would regulate the quality of adults that students spend their time around.

“While we cannot control their parents, we surely can regulate the qualifications of teachers and staff that will be there at the school to support and be around for them,” he said.

He added that to be employed as a pre-primary schoolteacher, an educator would be at least 18 years old and would have at least six GCE O’level subjects, including English literature, or English language or mathematics.

“… for the employment as a teacher at the primary, secondary or tertiary level, you also must have reached the age of 18, passed at least six GCE O’level subjects including English literature, English language, or mathematics.

Gleowansingh said this bachelor’s degree or any other qualification would be in the subject area in which educational programmes would be taught at these educational institutions.

He said that teachers would also “provide a sort of legal document that shows their psychological evaluation to create a safe space for everybody — students, and other members of staff included”.

The Ministry of Education would prepare a national curriculum and its application would be compulsory in all schools across the country.

“The curriculum is mostly the same as the old one with slight changes,” Gleowansingh said, adding that the added subject of mechanical engineering “will be enforced at the third year of secondary school.

“The fundamentals or basics of mechanical engineering. This will be compulsory for one year of secondary school but becomes optional from year four to year five,” he said, adding that students can pursue the subject further at the Community College.

Another addition to the curriculum will be an advanced placement class, he said, without elaborating.

The youth parliament education minister also said the curriculum would specifically include the compulsory teaching of the subjects that relate to the sustainable development goals of the United Nations and agriculture.

“Most of us see agriculture as something that is not relevant in most career paths that people choose. But that is not the reason for making agricultural topics compulsory,” Gleowansingh said.

“Agriculture as a whole acts as a venue not only to teach students how to be farmers, but also to train tomorrow’s scientists, nutritionists, teachers, and so much more. Agriculture teaches students to be responsible for something so fragile, such as a plant and crops, but also to nurture and keep planting crops in pristine condition.”

He said students can use the skills they learn from studying agriculture to grow their own crops at home and reduce the household’s food bill.

Regarding security in school, Gleowansingh said that “bodily searches can and will be carried out if a particular student arouses suspicion among peers and members of staff.

“If a member of staff has enough evidence to convict the students of the possession of intoxicating fluids, drugs, stolen goods or weapons, a search will be carried out of the students and said student’s property,” he said, adding that staff is permitted to contact the police if the student has any of these prohibited items.

“After each search of a student and a student’s property or report is to be written and handed in to the principal, which will then pass this report on to the Ministry of Education, only a full review is necessary.  Any obstruction during a search such as abusive behaviour or language by the person being searched, or a spectator is to be crucially penalised for this obstruction,” Gleowansingh told the youth parliament.

A qualified counsellor would be assigned to every school in the country to help students struggling with violent and impulsive behaviour and those who are grieving, feel sad or otherwise need someone to talk to.

Gleowansingh said cameras would be installed on school and compounds for 24-hour surveillance, and a nurse would be assigned to every school during class time.

In response, Maloney gave opposition support to the bill but noted that there are not enough government operated pre-primary institutions and, therefore, some parents would have to pay for their children to go to pre-schools, thereby attracting a fee.

“It is with great concern that the people of the nation know what measures are in place to accommodate students attending private schools and are paying school fees. Due to the fact that the bill states and I quote, ‘access for all children between the age of three to 18 shall be free’.

“Additionally, consideration has to be also given to children attending the government-assisted private schools, who even though are being assisted by the government, parents or guardians of these children are required to pay school fees.”

She said that passes in mathematics as well as English language, should also be a requirement for all teachers.

All in all, it is a good bill and it is required to curb the problem we are facing of some children not being able to attend school due to the fact that their parents or guardians cannot afford or they don’t feel compelled to send their child or children to school,” Maloney said.

“I have no objection to this bill, but we’d greatly appreciate it if the issues and concerns raised are addressed.”