Nicaragua rejects Gonsalves’ suggestion that US ‘reach out in friendship’ 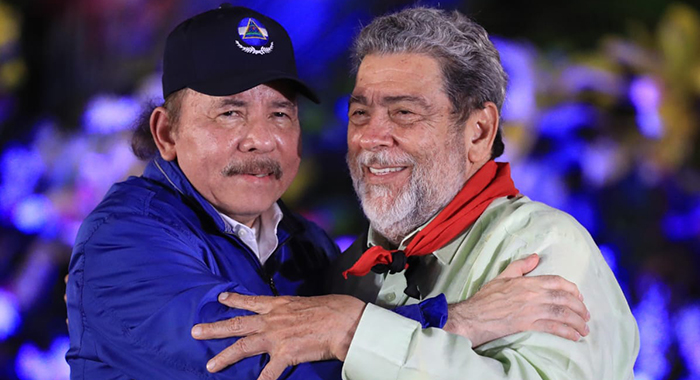 President of Nicaragua, Daniel Ortega has rejected a suggestion by Prime Minister of St. Vincent and the Grenadines (SVG) Ralph Gonsalves that the United States “reach out in friendship” to the Central American nation.

Ortega told a ceremony at which Gonsalves made the call on Tuesday that dialogues with the United States are like “putting a noose around your neck”.

“What dialogue can there be with the devil? As Che used to say, ‘To the Yankees, to imperialism, you cannot trust them even a little because they’ll finish you off.’

On June 17, the U.S. State Department said that the Ortega-Murillo government for years “has chipped away at Nicaragua’s democratic institutions and, along with a small circle of enablers, has allowed corruption and impunity to reign.

“Nicaragua is increasingly deepening its relationship with Russia as it turns its back on the Nicaraguan people.”

The State Department said that with the new sanctions, “the United States adds its voice to the international condemnation of the Ortega-Murillo regime’s malign behaviour.

“The United States joins the regional calls for a return to democracy in Nicaragua and will continue to use the diplomatic and economic tools available to us to promote accountability for the Ortega-Murillo regime. We call again for the immediate and unconditional release of political prisoners.”

On Tuesday, in Managua, Nicaragua’s capital, Gonsalves was decorated with the nation’s highest honour as the country commemorated the 43rd anniversary of the Sandinista Popular Revolution.

The celebration came one month after Gonsalves stayed away from the Summit of the America in Los Angeles after Washington failed to invite Venezuela, Nicaragua and Cuba.

At Tuesday’s event, Murillo said Gonsalves “is a tireless anti-imperialist fighter, who has dedicated his life to peace, integration, prosperity, and happiness in our Latin America”.

The vice-president said that the Vincentian leader has “led the anti-colonial struggle of the Caribbean peoples, firmly demanding that the colonial states make fair reparations for the genocide of Indigenous peoples and the consequences of slavery in the countries of the Caribbean Community”.

“Uncle Ralph”, as Orega referred to him, accepted the Order of Cesar Augusto Sandino “with humility and on behalf of the comrades and brothers and sister of the Latin American and Caribbean civilisation with whom I have been involved over the last 54 years”.

He said the “struggle has been one for independence for national sovereignty, for the freedom and dignity of our people, to live our lives in accordance with our own rules, derived from our own experiences and in accord with our own aspiration, for peace, for justice, for prosperity and for security for all”.

The prime minister said that SVG subscribes to large principles of the defence of sovereignty and independence, non-interference and non-intervention in our internal affairs, to carry ourselves and our civilisation higher and to work with all people all over the world in friendship but not in subjection.

He said that in 1979, in SVG, he celebrated the triumph of the Sandinista revolution even as he had not yet met Ortega.

Gonsalves said that one additional reason to support the Sandinista revolution was because the previous day, the Caribbean people and Garifuna — who originated in SVG – had told him the previous day that they celebrate the revolution.

“And they know it daily and if they tell me so, I believe and I act in accordance with what they tell me,” Gonsalves said and thanked the Sandinista revolution “for helping greatly in integrating the Garifuna and our Caribbean people fully into the development of Nicaragua”.

He said the revolution also permitted them “the autonomy to allow them to develop in this multi-ethnic society in accordance with their own traditions, their life, their living and production.

“Those who want to subvert the Sandinista revolution should first learn from that example,” Gonsalves said.

“And if they learn from it, they wouldn’t want to subvert it; they would want to hold up your righteous right hand,” he said, adding that Nicaragua and SVG work very closely at the United Nations and are foundation members in the Bolivarian Alternative For Our Americas.

He said that both nations are integral to the Community of States of Latin America and the Caribbean and work closely in the Association of Caribbean States.

“But the empire doesn’t understand that,” Gonsalves said.

“You have a country which is 350 million people. They have the largest economy in the world; they are reputedly the strongest military force in the world. Nicaragua is 6.2 million people, a country in Central America seeking to develop itself and its people. Why in God’s name would a country so large with so many resources, with such military strength, why would you want to pick on a small country like Nicaragua?” Gonsalves said.

“I asked myself that everyday. And it is difficult in ordinary comprehension to understand it but even what you can’t understand, you know what they are doing and you know it is wrong. I make the appeal to the United States of America, a country of great achievement, to reach out in friendship with the government and people of Nicaragua. Is that so difficult?” he said.

He said that instead of doing so, Washington recently did not invite Havana, Caracas, and Managua to the summit in Los Angeles.

He said that Kingstown, “as a matter of principle, refused to attend”, adding that all of Latin America and the Caribbean concluded that the United States was “wrong”.

“I reiterate my thanks and gratitude for this high honour. I shall for the rest of my life, seek to live up to the high expectation of this great honour,” Gonsalves said of the award.